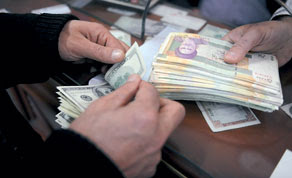 Iranian currency rates for the rial are generally blacked out in the press, while transactions on the open market remain virtually paralyzed. Few reports on transactions in Tehran put the rates at close to 35,000 rials to the dollar.
Posted by Nader Uskowi at 8:00 PM

The regime is hanging on a precipice.

The political developments in Iran, including today’s speech by Ayatollah Khamenei (see today’s post), shows the critical importance of the currency’s value and its link to rising prices in the country. Uskowi on Iran has been closely following the currency developments, starting two years ago, and today’s developments show why!


We get many emails daily on the traded value of the rial, but only publish those that we can get confirmation through the official press, spokesmen for the government, or reliable sources. This week, that currency exchange has been virtually come to a halt. Exchange shops are under police pressure to quote 28,500 for a dollar, and as a result they have stopped trading. The few trades reported are at around 35,000 rials for a dollar.

The normalization of the currency exchange cannot be achieved through police tactics. It requires some serious moves by the leadership to bring back the confidence to the market, namely policy and personnel changes at the highest level.

You people are deluded if you think this will have any impact on the regime. The vast vast majority of Iranians live paycheck to paycheck like Americans and/or are in debt. They can't afford expensive foreign goods and couldn't give a damn about the dollar going up in value. In fact they're rejoicing the pain felt by the rich Iranians, who are faced with putting their wealth into Dollars (illegal and risky) or losing it via rials.

@anon 6:19
Are you saying the ordinary Iranians don't care if they food cost went up?

You don't have to be an economist to understand that when the rial falls, inflation goes up.

The last people to suffer are the rich; the people impacted first are those with fixed income that have to cut their house budgets in half as a result of the currency and economic collapse.

Lets hope the decision makers in Iran have a better grasp on this subject.

"You don't have to be an economist to understand that when the rial falls, inflation goes up. "

Not all of Iran's economy is tied to imports.

What do you think happens to salaries when inflation goes up?

@anon 10:06
Wo cares about imports?
Basic items are doubling in price because of currency collapse. Everyone in Iran cares about that, and it's all interconnected and should be plain to see and understand.

@anon 10:07
You tell me.
Is the government increasing salaries every day to match the price increases. If it is then I stand corrected.

By the way not all Iranians are employed by the government. What happens to regular people with fixed salary jobs or who earn heir living day to day, what about them. Do you think they matter?!

You are deluded if you think Iranians are rejoicing the pain felt by "rich Iranians".
Beside state run industries,the private sector provides employment for tens of thousands of people.
If hardships hit these businesses,then layoffs will happen.
And layoffs mean hardship for ordinary people which will have a negative effect on other businesses.
As for your last comment that Iranians buying dollars is risky.
I would say the exact opposite by keeping your worthless rials is much to risky.