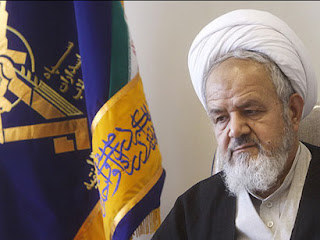 Hojat-ul-Islam Ali Saidi-Shahroudi, Ayatollah Khamenei's representative to IRGC, said IRGC regrets it has supported Ahmadinejad in the past.

“I admit that I have supported Ahmadinejad in the past, but we did not have the precise knowledge of what is going on in his mind, or what he wants to do in the future,” Saidi-Shahroudi noted. (Etemad, 22 October)

“Mahmoud Ahmadinejad could have been a hero, yet he behave the way so that people who were on his side, switched to the side of opposition, turning against him,” Saidi-Shahroudi added.

IRGC actively supported the re-election of Ahmadinejad in 2009 against his main rival, the reformist candidate and former prime minister Mir Hossein Mousavi. Disputes over vote fraud and massive demonstrations followed the election on 12 June 2009. Iran’s Supreme Leader Ayatollah Ali Khamenei then publicly sided with Ahmadinejad and against the opposition. IRGC, Basij and Security Forces began massive suppression of the opposition and dozens were killed and thousands detained. Mousavi and opposition leaders were arrested. Mousavi is still under house arrest and many are still incarcerated.

After the election, Ahmadinejad started moves deemed in defiance of Ayatollah Khamenei and the country’s conservative establishment. After Khamenei publicly ordered the re-elected president to dump his newly appointed principle deputy (also called the first VP) Eskandar Rahim Mashaie for his support of a “deviationist” ideology, Ahmadinejad reappointed him as his chief of staff, as influential and important a post. The tensions between Ahmadinejad and Khamenei reached a new high in 2011 when Ahmadinejad fired the minister of intelligence, Heydar Moslehi, who had been handpicked by Khamenei himself, only to be reinstated by Khamenei in a public display of humiliation for the president. Ahmadinejad in turn sat home and did not show up for work for 11 days, creating a severe political crisis.

In the latest sign of Ahmadinejad’s defiance of Khamenei’s direct authority over intelligence and security organs, he publicly announced last week that he was going to visit the notorious Evin prison in Tehran, where one of his top aides, Ali Akbar Javanfekr, is being held. Javanfekr, Ahmadinejad's press advisor and head of the country's state news agency IRNA, was sent to Evin in September to serve a six-month sentence for publishing an article deemed offensive to public decency and insulting Ayatollah Khamenei.

Iran’s Judiciary, also under direct control of the supreme leader, has blocked Ahmadinejad’s request, publicly not allowing a sitting president to visit the country’s main prison.

It is within such context, that Khamenei’s personal representative to IRGC is now saying that IRGC regrets supporting Ahmadinejad.

The next presidential elections in Iran will take place on 14 June 2013. Ahmadinejad is barred to seek more than two consecutive terms as president.

This Gentleman and those who he represents do not have any capacity to learn while projecting their own stupidity into a god-like 'enemy' who is constantly present inside and ouside their circle; an anti-Semite can never be an Iranian hero; he has a different (a deviated ) agenda and does not have the best interest of the country in his mind; if you are an anti-Semite, you are equally an anti-Iranian; that is the simple equation; so the Iranian poeple smelled the rat much much earlier than this Gentleman, who of course can not draw any conclusion from what he is saying because he is like Ahamdi a rat ...

Ahmadinejad is truly a pos. Unfortunately so are the vast majority of Iranians. That is why Iran will always be a backwards country of thieves, liars and scammers.

@anon 1:54
On what do you base this generalization about Iranians?

Are you excersizing your right to be prejudice or do you have some data you'd like to share with the rest of us.

Granted you may have to post it twice if you happen to be right about us being backward.

an Unknown Hojat Al Islam BLA-BLA said (4,5 year after 2009 election only ( 8 months to the new elerction where Preesident Ahmadi can not be relected)
WE REGRET TO SUPPORT AHMADI NEJAD

who cares ?
regret good for nothing.

The Hojat-ul-Islam BLA BLA, as you refer to Mr. Saidi-Shahroudi, is the personal representative of Ayatollah Ali Khamenei, who by the way is still the supreme leader of the country, to IRGC, which is by the way the most important branch of armed and security forces in the country. Who care? A lot of people, including all students of the Iranian politics and this lowly blogger care about hearing his statement regarding IRGC's support of Ahmadinejad.

Anon 1:54----- calling the vast majority of iranians that which you did says more about your own unworthuness and mental instability than anything else.

it truly was a comment for which you should repent.

Overwhelming majority of Iranians has no ancestral connections to Semites and ant-semitism should not be considered that one is anti-Iranian.

Typical stereotypical rubbish from an ignorant bigot. Do us all a favor and put your head in the toilet and flush. Repeat the process until you rid yourself of your filthy prejudice.

What does the word "a pos" mean, that you have put in your comment?