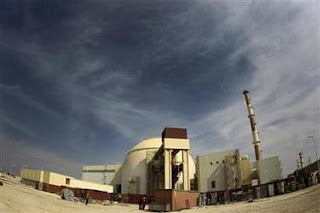 Iran’s Foreign Ministry spokesman Ramin Mehmanparast said Iran would negotiate on halting higher-grade uranium enrichment if given fuel for a research reactor. He made his comments on Friday during a visit to Kazakhstan, reviving previous talks of swapping the 20-percent enriched uranium for reactor fuel for Tehran’s research reactor.

“If a guarantee is provided to supply the 20-percent (enriched) fuel for the Tehran Research Reactor, our officials are ready to enter talks about 20 percent enrichment,” Mehmanparast said. (IRNA/Press TV, 13 October)

Earlier in the week, Foreign Minister Ali Akbar Salehi had told the German newsmagazine Der Spiegel that Tehran was prepared to offer a swap deal if its right to enrich uranium is recognized. Iran, however, has said that all sanctions against the country should be lifted before it stops enrichment activities. The expanding sanctions are fueling a serious economic crisis inside Iran. But the West insists on Iran stopping all activities that could lead to its achieving the capability to produce nuclear weapons before the sanctions are lifted.

In its latest report issued in August, the IAEA said Iran’s inventory of 20-percent enriched uranium has reached 90 kilograms (200 pounds). Experts say some 200 kg would be required before being refined to 90-percent purity to produce one nuclear bomb. Iran is producing about 15 kg of 20-percent fuel each month, and will have enough fuel by late spring. But it would also need considerably more time to assemble a deliverable nuclear weapon.

This shows the world how you deal with a porru Iranian - you beat them down until they beg for mercy.

Iranians have the worst personalities.

British used to have a saying.

"Keep the Arab full and the Iranian hungry."

@anon 2.29
Please re-word your comment so it can be published.
Sorry

"Keep the Arab full and the Iranian hungry."

It's so true. How did it take the West this long to remember this truth?

With all due respect to the commentators about British wisdom regarding its colonies and the british take on ethnic based behavior tendencies, lets remember that the British empire failed.

It failed because it failed to understand that such generalizations were inherently wrong and the only true generalization is that humans universally want freedom(from Britain, or from Iranian dictatorships, etc).

Btw Egypt, Sudan, Jordan, Syria, iraq, and many more countries, are all Arabs but were never really rich, not by design nor by accident.

So lets get passed these ancient nonsense and join the 21st century.

Apparently J. Fazeli supports the sanctions and obviously wants to "Keep the Arab full and the Iranian hungry."

I am not suprised about this position since he described himself that he is not a Persian.

What I am suprised that Mr. Fazeli doesn't use the same standards and tries to quash a reasonable and important comment of the 1:47PM's Anon and at the same time is silent when the 11:19AM Anon slanders that "Iranians have the worst personalities".

He also remembers that British empire failed, but he has been staunchly supporting its (empire) continueous policies that created the zionist outcast and the colonies of the Northern America.
And, It cannot be passed that that zionist entity became a master of those ancient emporium's nonsenses...

Those ancient nonsenses have been still continued by empire's surrogates and must not be passed like you suggest.

Since you described yourself as a non Persian, then it would clarify many things if you would describe....who are you, by an ethnic origin?

I suspect that sometimes certain agencies and entities create numerous and fictional personalities to carry out their activities...and pretend that there are "many educated" persons supporting their causes.

Thanks for a good contribution.

@anon 7:24
Your repost in unchanged. Please delete he last sentence before your comment can be published. Sorry

As for offensive comments, please read related material on the site. As far as I'm concerned, Harsh Criticism without inappropriate language is OK, just like your last comment, or anon 11:19 comment.

Btw, please help me understand how you knew about the readonable content of deleted unpublished comments by anon 1:47. Is he in the next cubical?)

Only a dunghead would spew anti-Iranian rubbish so why don't you do us all a favor and take your filthy prejudice elsewhere.

Please be informed that you are wrong, because your respected - the cia, after October 2012's updates, informs (if not wrong), that that Persian ethnic group grew to 61% of Iran's population.
Data from the world fact book of the cia.

I am not using vulgar criticism nor language.
I have noticed that you as a censor on this blog, let other Anons to use primitive and disparaging descriptions against me and Russians, which incude words fool and etc..

I believe that I am entitled to a harsh descriptions of those who under false pretexts commence wars, where millions of innocent people have to die !!

I have had an access to read 1:47PM comment that say:
British used to have a saying
"Keep Arab full and the Iranian hungry."

And it is not importatant that someone was somwhere born, but it is important whether you support a majority, which still may grant you a moral right to represent them. If you are from a minority and you do not stay with them inside of Iran, your adversary opinions are not for an usage, by the will of the Iran's residing majority.

@"dissident"
feel free to insert your numbers into my comment and read it again.
(Interesting that you now consider the CIA an information source)

I know you maybe more acustomed with the word "censorship", but the blogosphere uses the term "comment moderation". If it was censorship none of your comments would be published, just like none of my comments can be published on pro-government blogs in Iran.

I have read your previous comment again and I may agree with you; if it was your previous intention, that for the most people who were born or have parents born in Iran, the Iranian identity is more important than the particular ethnic one.

I try to read information from different sources before making my opinion or conclusions.

Iran should cut and run.

Iran is getting the sanctions for the Bomb, so they might as well get the bloody thing.

Hi,
you wrote: "In its latest report issued in August, the IAEA said Iran’s inventory of 20-percent enriched uranium has reached 90 kilograms (200 pounds). Experts say some 200 kg would be required before being refined to 90-percent purity to produce one nuclear bomb."

That is not correct. In the august IAEA report the number is fixed at 189 Kilogramms of 20-percent 235U as you can read here: http://www.iaea.org/Publications/Documents/Board/2012/gov2012-37.pdf

You also wrote: "But it would also need considerably more time to assemble a deliverable nuclear weapon." It would take Iran at least five years to build a deliverable weapon if you consider delivery by plane or missile and not by heavy-load truck. With a single quantity you could build some crude device, a nuclear demonstrator, not a deliverable bomb.