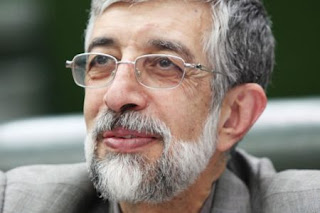 Gholam Ali Haddad Adel, senior advisor to Iran’s supreme leader and former Majlis speaker, accused “enemies” of Iran for their “conspiracy” against the country’s national currency, the rial. Haddad Adel, whose daughter is married to Mojtaba Khamenei, the leader’s son, said the plunge in rial’s value is part of a “psychological war” waged by the enemies to undermine the Islamic Republic.

“Iran is overcoming the psychological war and conspiracy that the enemy has brought to the currency and gold market and this war is constantly fluctuating,” Haddad Adel said. “The arrogant powers (the U.S. and the EU), in their crude way, think that the nation of Iran is ready to let go of the Islamic revolution through economic pressure but we are establishing Iran's economic strength,” he added. (Fars News Agency, 5 October)

This week, the merchants of Tehran Grand Bazaar, the heartbeat of the city’s economy and indeed the heartbeat of the Islamic Republic, closed shops in protest over the plummeting value of the rial and the skyrocketing prices. There were sporadic street demonstrations against he government over its policies leading to the currency’s collapse that had lost a third of its value within a week. The security forces were deployed throughout Tehran to quash the protests and 16 people were arrested for “disturbing” the national currency.

Haddad Adel is trying to deflect criticism from the government over the currency fiasco and blame the problems solely on "foreign conspiracies," presumably for instituting toughest sanctions against the country’s banking and financial sector. He did not say if the government’s policies were responsible for those sanctions. Nor did he elaborate on government’s own inflationary policies, like distributing billions of dollars in cash to the population as part of its subsidy reform program, which caused serious inflationary pressure on the currency.

"In fact, it is Khamenei's politicization of the nuclear program which has hurt his regime the most. He does not permit deviation from, or open debate about, the official line on the direction of the program. Khamenei has taken what is essentially a nationalistic project that enjoyed widespread consensus and turned it into a divisive issue. Khamenei's Siyasat Bazee with the nuclear program has weakened the regime and crippled its performance in the face of economic challenges."

Yes, that's what it must be.

It's that secret group called the UN, and that hidden thing called the UN Security Council, and the mysterious EU.

So you should enyoy from "regime mistakes- (which is undermaining itself???)", instead of wasting time for your "concerned comments" (about what???).