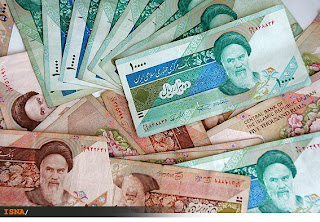 The New York Times reported today that because of EU sanctions, Iran is facing a strange problem of not being able to print money. The European companies that have been providing currency production services to Iran say they have stopped doing business there. Koenig & Bauer AG of Germany, for example, said it has not responded to an Iranian request for bids to make the presses to print new rials.
It is believed that denying the Central Bank of Iran the ability to increase the supply of money during a period that inflation is eroding the rial’s purchasing power would hasten the economic crisis facing the country. But limiting the rial circulation could also have the opposite effect of preventing hyperinflation.

Can lazy Iranians do ***anything*** ???? They trade oil for everything they have!

not a big problem. Iran's friends in North Korea are the best in the world at printing other nation's currency and have been for decades.

they can run up a hundred trillion rials if Iran can send them dollars to cover the cost of printing and postage.

w/o a medium of exchange and w/o FX reserves, declining oil sector (primary source of money), and factors of production scarcity... the fact eventually arrives- the ultimate regime nightmare... hunger.

There is time yet, this does not need to happen, unless regime remains intransigent.

I thought Iran design print and mint their own currency.

Can you be anymore of a dunghead with your "lazy Iranians" nonsense?

Now if he would have said lazy Saudi's it would have been more believable.

This doesn't make any sense if Iran allows foreigners to hold it to ransom.