In 2009, many Iranians overseas watched with helplessness as their fellow citizens risked everything by openly demonstrating against the regime. We also watched how the Green leaders on the ground were eliminated one by one, leaving the remainder of the movement leaderless and at the mercy of the regime secuirty forces.

In 2009, it became obvious that the regime was monitoring Facebook, twitter and SMS, and yet the leaderless movement kept using these media outlets to plan their demonstrations and announce the routes and times. Even though most Iranians couldn't have access to uncensored satellite television and Internet, there was no effort to evolve the communication system of the revolution to include more generic media, not subject to wholesale censorship, like spreading the word through the use of old fashioned DVDs. We should remember that in 1979 Khomeini taped his speeches on cassettes which were then mass distributed in Iran, because he had no access to TV and radio inside Iran.

In 2009, the Iranian regime took videos and pictures of demonstrators and tracked them down one by one, days and weeks later, yet demonstrators kept coming out during daylight and kept getting their pictures taken by the regime. This futile effort continued until enough people were tracked down and arrested.

In 2009, students, the intellectual elite, and the affluent kept on demonstrating on working days, and in doing so missing the presence of the working class, many of whom couldn't afford to miss work to demonstrate, yet the green leaders didn't wise up or evolve their strategy to focus their demonstrations on weekends.

So as we watch yet another round of leaderless semi-spontaneous demonstrations in 2012, one could be forgiven to wonder why nobody seems to have learned the lessons of 2009 or even 1979 revolution.

-Why are the demonstrations are still occuring during daytime, and not at night when the regime cameras and surveillance is less effective?

-Why are the demonstrations being held on a weekday, and not on a Thursday night (the equivalent of Friday night in the west) so that they would attract the working poor and middle class, in addition to the intellectual elites?

-Why risk death to simply shout obscure slogans?
If the people are going to risk death to challenge the regime they might as well say "مرگ بر خامنه ای" or ask for regime change, instead of beating around the bush.

If the "dollar revolution" folks figure these first steps out, they might potentially move on to figuring out ways to deal with the mounted police on bikes, who were highly effective in crowd control despite Tehran's heavy traffic. Without the constant evolution of revolutionary methods there can be no successful revolution in Iran.

With a little thought, many more challenges might become history, if only the new revolutionaries would LEARN from history. 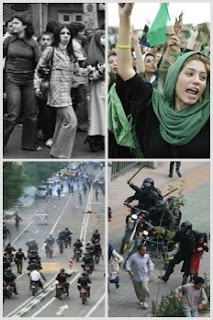 Sorry about the date typo

I really resent a cowardly Iranian inciting demonstration in Iran.

Why don't you go there and put your neck on the line?

Or why not try demonstrating here and see how quickly you get tasered?

after green revolution
we got a chicken and now a currency revolution.
at least today the $ fell to 28000 rials

The cowardly Iranian is a person like you which sits comfortably in the West and gloats at Iranians who wish freedom from oppression are cut down.
It's every Iranians duty including the ones abroad to challenge the regime.
Just like the regime has hired people abroad to spread their lies,Iranians abroad must challenge scum like that.

Now go ahead and "tasered" me,LOL!

How much do "agencies" pay for that kind of the instructional article?
Do they provide a pension too?

@Dissident: well, at least we are not payed by the Chaghu-Kesh regime, which you support

@"dissident" 4:41
I don't know but I'll check and get back to you on that. I appreciate you bringing this up; With the economy as it we all could use the money (in $ of course).

Since we are talking money, what's the going rate for defending a failing regime nowadays? You can answer that question in £.

@anon 3:39 Is that what NAJA does? Tasering demonstrators?

If the regime didn't murder and imprison dissidents without the benefit of due process, many of us abroad would have stood with our fellow citizens in person.

Perhaps some of us will brave it when the odd are slightly less than 100% that we would get killed before achieving much.

Btw people like me are the only thing that will stand between the regime henchmen and the angry mob once the "Iranian revolution" succeeds.

@anon 4:09
It took billions on national $ reserve to bring the rial from 37000 to 28000. This is an example of short sightedness, not success. The rial will fall again in the days and weeks to come and the billion wasted will be simply billions wasted.
Does inaptitude mean anything to you?

for every demonstrator tortured and killed, he gets a pound of flesh.

In response to your question, I have to inform you that I have never made so far any transactions in the GB's currencies.

I am not paid by any entity for doing my activity on this blog.
I work for the better future of the world and Iran.

Iran doesn't give bad examples to the world by inciting wars that killed millions of innocent peoples.
Iran doesn't promote arms races or unjustified military buildups like other do...and where huge amounts of money are wasted for military spending instead for programs that address social needs...

If someone portray himself as a socialist, who cares about ordinary poeple, that person should promote actions where the war solutions, to solve the problems, are eradicated.

It's interesting that among the recent demostrations taking place in MENA, it is the lower class majorities that have provided the bulk of protesters and impetus for change, in hopes of social and economic equality. Only in Iran do you find the demonstrators made up of the middle class minority, in the form of northern Tehranis, radicalized students and now Bazaris. But bear in mind, in the latter case, the demo was against Ahmadinejad, his economic polices, and not against the regime as a whole.

Do you know what that means Mark Pyruz?

To put some people out of their misery watch on YouTube....


And then you people will stop claiming they chanted against Ahmadinejad.

Mark, I agree that there is something specific about the bahari demonstrations.. The bazaris are demonstrating because they can't sell their merchandise as people are struggling financially, and when they do make a sale, the money they get can drop in value within 24 hours, wiping away their profit. I am actually surprised that the bazar is still open for business since they are more likely to lose money than make a profit in this currency collapse environment.

All the above aside, if you watch the Youtube clips, you would see that some of the traditional 2009 type young demonstrators were opportunistically joining in with the bazaris and shouting "bazarie ba gheiratat hemayat hemayat" for example. They used the opportunity to come out as they had no plans of their own.

As far as demonstrating on Thursday nights, I think if you look back at the pattern of 2009 demnistrations, the activists were trying to demonstrate as many days as they could, and some were randomly falling on different days and different time. They also demontrated on symbolic days in the Iranian calendar, without any concerted effort to make sure that the time and day is convinient for the masses.
The demonstrators in 2009 also gave advance notice on Facebook and twitter, about the time of demonstrations and the route and destination, which was quite handy for the security forces to deploy accordingly.

The reason I think the recent event in the bazaar are relevant to the potential new Iranian revolution is that I think diffemt segments of society may have different motivations to complain or demonstrate, but there may come a time that the bazaris, the elites, the students, and the poor and middle class when they may see removing the regime as a common cause. After all, the lack of political and social freedoms compounds the basic day to day economic hardships for every Iranian, and not just the elites.

Time will tell of course. Hopefully a year from know I will be in a position to say I told you so!

@dissident 4:36
I'm sorry that your not getting paid for your work. Keep the comments coming, but please know that as a CIA Zionist agents I won't be agreeing with you on much.

Emporiums use to come, sooner or later, to their ends...