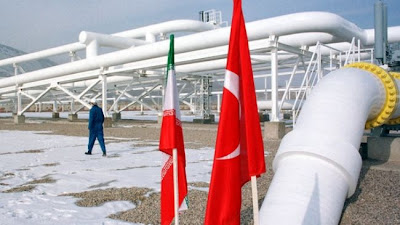 A huge explosion in eastern Turkey blew up a pipeline carrying Iranian natural gas, halting the flow of gas and injuring 28 soldiers in the area. The explosion occurred on Thursday night, less than a week after gas flow was restarted following an attack on 8 October.
“Sabotage carried out late last night on the pipeline caused damage and triggered a fire. Twenty-eight soldiers on duty in the area were wounded,” said an official from the Agri governor's office. (Reuters, 19 October)
The soldiers were being treated in various local hospitals for minor injuries, burns and smoke inhalation, and the fire had been extinguished, Reuters reported.
Russia’s Gasprom is to increase its gas supplies to Turkey to offset the shortfall.The blast occurred in the area of Eleskirt, a town in Agri province.
UPDATE: The pipeline's repair was completed on Friday 26 October (Mehr News Agency).

File photo: A section of Iran-Turkey gas pipeline (Reuters)
Posted by Nader Uskowi at 9:13 AM

Anon 1:46PM
Russia will certainly gain from your loss.
However, you are already a loser, because Russia is a winner.

The biggest loser is Turkey since Russia is notorious for selling oil at ridiculously high prices. That's why Turkey is exempted from Iran oil sanctions because it does not want to replace Iran with Russia as its primary oil supplier.

No, 9:08 Turkey can far better afford to pay higher prices than Iran can afford to lose more business on the only thing that it sells to the world.