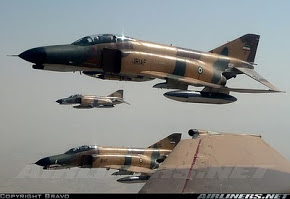 An Iranian air force F-4 jet has crashed in the Persian Gulf port city of Bandar Abbas on Saturday. The jet crashed while taking off from the city’s air base. The two airmen on board were reportedly killed in the crash. Iranian officials denied a report that the jet fighter was intercepted over the Persian Gulf before the crash. (Assr-e Iran, 14 October).

You have a military expert(s)- Mark P.? Are they to busy to clarify that situation or post any comment in recent weeks?

I personally think that those crashes are due to the ages of aircrafts and lacks of multiple spare parts...
Other countries, incuding the US and Russia despite ample resources have had many crashes in recent years too.

The F-4 Phantom jet fighter crashed during the takeoff,
as stated.

Assr-e Iran also says that the Iranian officials have denied reports that the jet was intercepted over the Persian Gulf.

Maybe during critical time of take off the jet lost power and pilots didn't have time to eject.

Is it possible that Directed Energy Weapons from warships, airplanes, drones or satelites could impaire jetfighters during their take offs?