In line with the Islamic Republic of Iran’s strategy of expanding its naval presence in international waters, Iran Navy’s 22nd fleet of warships has called at a Sudanese northeastern port in the Red Sea. The fleet which comprises Kharg helicopter carrier and Admiral Naqdi destroyer arrived at the Sudanese port on Monday. The Navy’s 22nd fleet was dispatched to the coasts of Djibouti and Bab el-Mandeb Strait in late September to convey Iran’s message of peace to the regional countries and maintain the security of shipping corridors against maritime terrorism. The Iranian commanders of the fleet are scheduled to meet with Sudanese Navy commanders during their stay in the North African country. 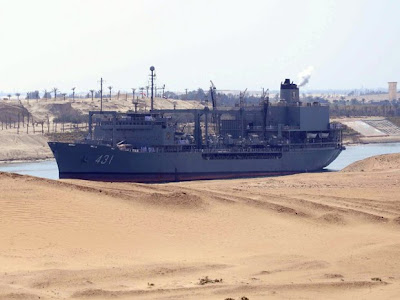 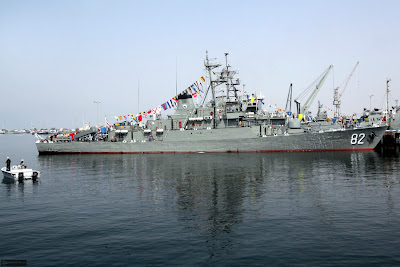 The article describes the Kharg as a helicopter carrier. It is not. It is a supply ship.

those two old tubs are an enormously impressive fleet and might well give the Sudanese pirate Zodiacs all they can handle.

Fleet, LOL! Admiral Naqdi a destroyer? Why don't they just call it a heavy battleship as long as they're just making stuff up.

Anon 7:27 --- could be that the author meant to call it an aircraft carrier.Std

Iran sends some obsolete POS corvette and a tender in case it brakes down. I'm guessing a tugboat is the other ship in this "fleet".

Anonymous 11:56, in that case, an almighty paper aeroplane. An armed one. The fact is, Iran is starting to expand its military presence in the world. Any state that does so, has to start from small beginnings. No small effort.

Anonymous 7:56. In case you have not heard, Iran has been battling Somali pirates and in the process, helping to protect international, commercial ships. A commendable and important effort. Still, for some people, it's so much easier to sneer and make childish comments, instead of learning reality; because it doesn't require them to make an effort and use their brains.

Mark, is it normal (internationally) to call one vessel and a supply ship a "fleet"? No sarcasm, just wondering.

jay is a POS troll and should take his childish rubbish elsewhere.

Anon 11:43------ Iran is very certainly starting very small in it's attempt at militarily asserting itself. Without ships or airplanes other than those left over from before the revolution, there's nothing really that iran has to show the world.

Anonymous 1:51PM. Iran does not only have ships or aeroplanes left over from before the revolution. Iran has been building its own armaments, including naval ships, boats and submarines.

Certain people like to sneer and make childish comments about Iran, not only because it does not require that they use their brains but; it is also a desperate attempt to try and downplay and distract from, Iran's growing, military presence in the world. That presence obviously has certain states and their supporters, scared.

please name these warships that Iran has built in late years.

Very good comment, and I would also like to add, that Iran is planning an expansion of its submarine fleet with larger vessels and Sudan can be very valuable as an ressuplying point for the new submarines...
A control of the Red Sea and the control of the Saudi Arabia from both sides, will greatly enhance Iran's military capabilities.

Iran has built large fleet of small submarines and as of today western sources estimate their number to exceed 14 vessels.

The submarines not destroyers are the priority, however construction of other big vessels is continuing and destroyer "Velayat" is waiting to be launched in the Caspian Sea as well as the larger destroyer Sahvand (with facilities for 2 helicopters?) has been launched and instalation of equipment continues.

At present the PG area can be protected with smaller vessels which are cheaper and fit better to an asymetric strategy...

"[I]s it normal (internationally) to call one vessel and a supply ship a "fleet"? No sarcasm, just wondering."

Internationally when one refers to a "fleet" it either means the entire navy ("it's the biggest ship in the fleet"), or a large independent portion of the fleet ("There are 180 ships in the Atlantic Fleet, out of the 280 ships in the Navy").

When a group of ships is dispatched on a mission that group is called a Task Force (eg. Task Force 34, or Carrier Task Force 77). A TF normally has one or more Carriers, Battleships, or Amphibious Assault Ships at the center, along with many escort ships (Cruisers, Destroyers, Submarines).

Groups of smaller ships are Squadrons, Divisions, Flotillas or Task Groups (The terms vary based on what kind of ship and in what navy). These are normally one or two large ships or a collection of small ships.

A single ship is an Element.

This provides a fairly accurate rundown on the terminology:
http://en.wikipedia.org/wiki/Military_organization#Navies

@TLAM Strike 5:39
Thanks for the clarification.
Calling the one ship and a supply ship a fleet maybe due to a translation of terminologies issue (Farsi to English) then.