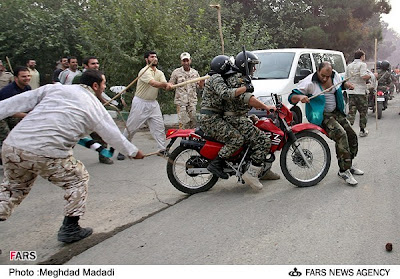 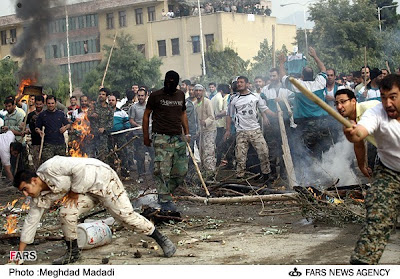 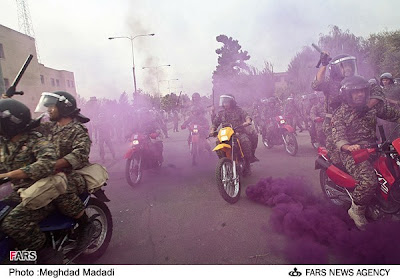 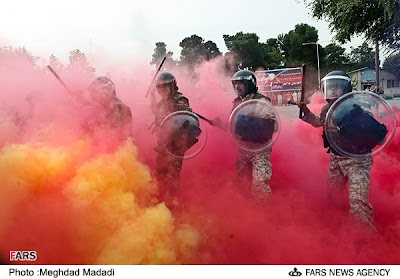 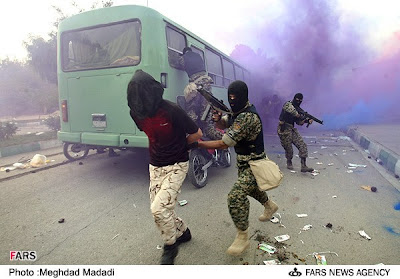 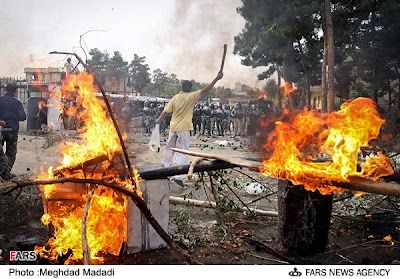 RGC-Basij elite rapid reaction units on Friday conducted drills on the streets of Tehran to quell protests. This was their second day of maneuvers. On Thursday, they practiced hostage rescue. The exercises are code named Ela Beit-ul Moqadas (“To Jerusalem”). [Fars News Agency, 19 October]

Oh, they are so worried about the coming elections and therefore pull out a bunch of uneducated idiots from rural and poor areas, to crush any voice of opposition. What has Iran become, if these barbarians are ruling it? Look at them for God sake.

It's amazing that the a regime would shameoessly and openely drill for another brutal crackdown.

Sooner or later the people will decide to start defending themselves like it happened in 1979.

This attitude guarantees a civil war before regime change can take place. A sad but likely prospect!

Btw thanks for showing us that long sticks are the best weapon against the bike mounted riot police. Lets hope someone in Iran is watching.

Long 'sticks' has always proven to be the best weapon against Iranian forces, as the Greeks already showed us with their Phalanx. Hehe.

1-DOES IT MEAN THAT IDIOTS IN IRAN LIVE AMONGST THE POOR?

2-DOEST IT MEAN UNEDUCATED IDIOTS COME FROM THE RURAL AREAS?

conclusion-how can a so called sincere liberators caring the flag of democracy ,have such bone chilling raw degrading words to innocent people?

Ha Ha Ha Ha!!
What a bunch of yobs!
I guess the Iranian people will have to come out into the streets and introduce some respectful order.

Scary thugs. These violent folks are disdainful, a scorn for society. :/