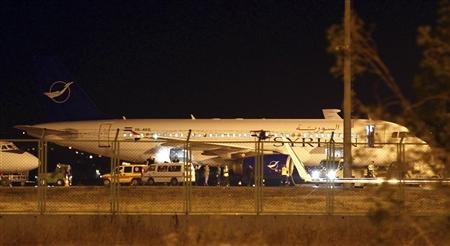 “This was munitions from the Russian equivalent of our Mechanical and Chemical Industry Corporation being sent to the Syrian Defense Ministry,” Erdogan told reporters in Ankara, referring to a state-run Turkish manufacturer that supplies the country's army. (Reuters, 11 October)

With the power vacuum created by Iran's struggles, Turkey is really sticking its neck out and looking to get smacked.

It reminds me of Ahmadinejad during the mid 2000s boom in Iran.

Why did the pilot land? He should have signaled "up yours" to the Turkish jets and continued on with his business.

It's only fair that Syria get supplied, cause Turkey and Saudi Arabia are providing arms to the insurgent terrorists.

They carry too much pride and prestige (strong sense of nationalism) which creates hindrances when resolving disputes.

MR.USKOWI,will you publish what HIZZBOLLAH is saying about the IRANIAN made drone that managed to enter deep into ISRAELI land without any detection .why have you skipped this important news?.HAVE A BALANCED DAY, wont you?.

B.M.A,if it wasn't detected how come it was blown out of the sky,LOL?!

We carried the story on Tuesday 9 October!

Anonymous said...
"With the power vacuum created by Iran's struggles, Turkey is really sticking its neck out and looking to get smacked."
------


the power vacuum is that caused by the loss of control of the Assad gov't and Turkey is sort of compelled to try to keep the coming chaos from the fall of that Syrian regime away from Turkish borders.

and Turkey's neck is not that far out as it has a good deal of support and backing.