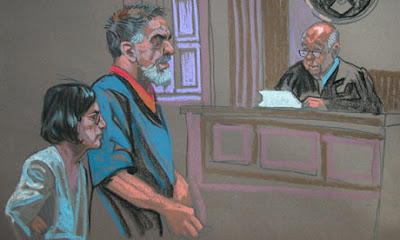 Manssor Arbabsiar, a 58-year old Iranian-American, today pleaded guilty to plotting to kill Saudi Arabian ambassador in Washington. He entered the plea to two conspiracy charges and a murder-for-hire count in US district court in Manhattan. Arbabsiar told Judge John F. Keenan that he intended to kill Ambassador Adel Al-Jubeir. The judge set the sentencing for 23 January. (AFP, 17 October)

Arbabsiar, a resident of Texas who holds dual American and Iranian citizenships, told the court that he hired what he thought was a drug dealer in Mexico last year, for $1.5m, to carry out the attack with explosives at a Washington restaurant. Arbabsiar said he made a $100,000 down payment that was wired from an overseas account through a Manhattan bank. The “drug dealer” turned out to be an FBI agent.

Arbabsiar has been held without bail since he was arrested on 29 September 2011, at John F. Kennedy International Airport.
Photo credit: A courtroom sketch shows Manssor Arbabsiar as he pleads guilty at New York Federal Court. (Christine Cornell/AFP/Getty Images)
Posted by Nader Uskowi at 3:21 PM

Was Mr Arbabsiar involved in drug related crimes? Any (secret) deal or a plea bargain...?

Mr. Arbabsiar was arrested on conspiracy to kill the Saudi envoy, not on any drug charges. Do not know yet if any plea-bargaining was involved, and what. Will update as soon as info is available.

I see that nobody wants (has courage) to continue comments on that very important matter, that can provide the PRETEXT...

From my research, couple important facts comes up for a consideration.
First thing is that Mr. Arbabsiar was arested for felony possession of narcotic(s) in 2010.
- In the January 2010, a home owned by Mr. Arbabsiar went into a foreclosure; he and his second(?) wife become separated, where their son continued studies of the biology.
During Mr. Ababsiar's over 30 year presence in the US, he had many financial "problems", but according to his university's roommate Mr. Arbabsiar continued to have substantial property holdings in Iran, worth about $2 millions.

Right after events of foreclosure, separation and the arrest for possesssion of narcotic, Mr. Arbabsiar informs friends he is going permanently back to Iran. However he comes back, for some time, where he meets also his former roommate- for about 3 days and later he is involved with a "drug dealers".
-He goes to Mexico in May(?) 2011, where a "drug dealer" the "Junior" suggests to assasinate the SA's ambassador (with explosives) instead of kidnapping him, like Mr. Arbabsiar earlier suggested.
- After these meetings Arbabsiar aranges the transfer of $100 000, to the US located bank and in the September 2011, he is arrested at the JFKennedy Intl. Airport.

Because his defense already says that he suffers from a bipolar disorder, so a punishment may not be too...

It would be interesting to find out the precise dates of his departure to Iran in 2010 (it was during the spring) and the date of the drug arrest as well as the date of his return from Iran to the US.

You skip some words, like the PRETEXT in this case, from the first page of your website, where the short descriptions of comments appear in the section Recent Comments.

I am mentioning about that, because by ommiting one word at the end of sentence, you will not inform other visitors, where this comment belongs to and there was plenty space in that third line to put that PRETEXT word..

I have noticed that for other commentators you put more words (file full lenght of the third lane) in your Recent Comment's descriptions.

Who is a censor then in this case?

From the article: "told the court that he hired what he thought was a drug dealer in Mexico last year," and "The “drug dealer” turned out to be an FBI agent."

A familiar pattern used by American authorities in so-called terrorism plot cases which turn out to be manufactured cases. Entrapment, set ups where there never was a genuine plot: only fake plots suggested by government agent provocateurs to an innocent person and they are coerced and cajoled until they finally go along with it. The authorities even provide fake supplies for the plots, to convince the innocent person. Consider the 2009 Bronx terrorism plot. The car bombs and surface-to-air missiles involved, were actually fakes given to the plotters with the help of an informant for the FBI.

Usually, the innocent person is a muslim and then the authorities say "we stopped a muslim, terrorist plot". It's a con trick against the public to perpetuate a police state, the war against muslims and provide excuses for waging wars against America and Israel's enemies.

It has been reported that Mr. Arbabsiar had several times smile on his face, during his recent presence in the US court...

According to the information published by the US newspapers (the WP), Mr. Arbabsiar; after his capture, allowed US officials to listen in on his conversations with his Iranian contacts...

Will Mr. Arbabsiar have a full freedom for conjugal visits and a freedom to drink the Jack Daniels whisky, since they were the main objectives of his life in the "freedom world"?.