What an Imperial Iranian covert operation against the Soviet Union can tell us about the controversial circumstances surrounding the recent downing of the Turkish F-4 jet by Syria. 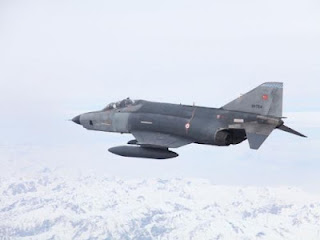 Syria and Turkey have made diverging claims -- to say the least -- regarding the recent downing by Syrian air defences of a Turkish Air Force RF-4E Phantom II jet. Turkey whilst conceding the jet did in fact briefly 'accidentally' violate Syrian airspace has continually insisted that the jet was downed illegally over international waters.

Syrian President Bashar al-Assad has went as far as to assert that the jet was flying in the same corridor of Syrian airspace that was used by the Israeli Air Force during its strike against a suspected clandestine Syrian nuclear facility in 2007.

Reports have indicated that in cahoots with the CIA the Turks were performing reconnaissance missions to determine the status of Syria's air defense, hence probing it for any blind spots which could be potentially exploited.

Such intelligence would be essential if NATO is to fight a war with Syria.

These circumstances are reminiscent of operations the Shah's Iran undertook against the Soviet Union in cahoots with the CIA throughout the 1970's?

In the 1970s the CIA and the Imperial Iranian Air Force ran a program of aerial espionage from air bases in Iran. The purpose of this operation was to probe the Soviet air defences on its frontier with Persia and determine if any holes existed in their radar coverage -- which could be used in the future, be it for further covert action, or to take advantage of in the case of a war with the USSR.

The Americans even devised a plan whereby they would get Iranian pilots to fly the jets during the reconnaissance missions with their American instructor remaining in the backseat, so if they were forced to land or eject due to detection and interception by Soviet forces they could claim that they had simply gotten lost during a training exercise.

Indeed, there was notable confrontation during one of these operations that saw to a Soviet MiG-21 purposely ramming (after its missiles and guns failed to function) an RF-4C -- killing its Soviet pilot in the process -- in order to down it. The two crew-members of the RF-4C, an Iranian Air Force Major and 'backseater' United States Air Force Colonel survived and were detained for 16 days by Soviet authorities.

These projects are well worth reading into as they are strikingly similar to the circumstances surrounding the downing of that Turkish reconnaissance RF-4E. It may in fact soon become evident that the Turkish Air Force was conducting a strikingly similar mission against their southern neighbour when their RF-4E was shot down.
Posted by Paul Iddon at 3:46 PM

Intelligence gathering is vital, specially when you had a powerful and hostile neighbor like the Soviet Union.

who rely on us will lose

No.Iranian pilots were not killed for CIA.It was Iran's business to know about its biggest neighbor communist Russia.And Turkey is a NATO member.
I'm afraid you're wrong again.Iran will lose against the US.Iran couldn't defeat Iraq for eight years yet the US defeated Iraq twice in two weeks.

Iran could have defeated Iraq if it wasn't for the West's unrelenting support for Iraq.

...yet the US defeated Iraq twice in two weeks.

There is no comparison. The US had help from its coalition partners (34 nations) whereas Iraq had none so basically it's thirty-five against one hence the coalition forces were able to defeat Iraq in such a short amount of time.

The coalition was just an excuse, baring Britain the rest were tokens.The US could have done it by themselves.
Don't kid yourself.
End of the day Iran won't be able to stop the US from pulling its infrastructure apart if it so wishes.

I would also add that the Iraqi military was already weakened due to its previous war with Iran. The war of attrition extracted a heavy toll on Iraq's military and after the end of Iran-Iraq war, the Iraqi military never recovers its full strength. This factor played a significant role in accelerating Iraq's defeat.

At least Iran has won many key battles than Iraq has and in my book, that makes Iran the winner of the war.

Guys the debate is going way of course here the facts are that the US is a first rate superpower and Iran has a third rate equipment and forth rate commanders who claim that they can defeat the US.
If anybody believes in their propaganda without studying the facts then more the fool them.