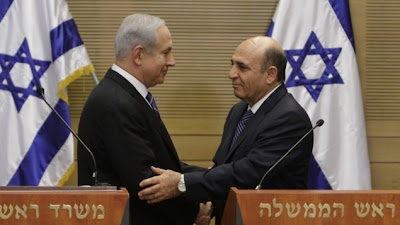 Israel’s opposition leader Shaul Mofaz, who until last week served as deputy prime minister to Benjamin Netanyahu, gave a broad hint on Monday that the prime minister intends to launch a military strike against Iran, wrote David Horovitz, the editor of The Times of Israel, in his column today.

Mr. Mofaz, a former IDF chief of general staff and defense minister, led his Kadima party out of Israel’s governing coalition last week. The Times quotes Mofaz as wanting to have no part in “operational adventures” planned by Netanyahu.

“Kadima will not set out on operational adventures that will endanger the future of our young women and young men and the future of the citizens of Israel in the State of Israel,” Mofaz said. (The Times of Israel, 23 July)

Previously, it was thought that the Kadima Party had left the coalition because of disagreement with Likud over military service by ultra-Orthodox Jews.

Photo Credit: Shaul Mofaz, right, and Benjamin Netanyahu during a conference on 8 May 2012 / Miriam Alster/Flash90/The Times of Israel
Posted by Nader Uskowi at 4:34 PM

I wonder if Mofaz is also thinking of the fate of the thousands of Jewish Iranians within Iran who might be subjected to Government retaliation in case of an Israeli attack. Mofaz himself is an Iranian Jew by heritage.

If there are any attacks by Israel against the Islamic regime sites then it will happen after the downfall of Assad's regime and the possible aftermath of Hezbollah in Lebanon.
That way Israel can concentrate on Iran with its retaliation not its proxies.

Not really much there that points to Iran....at all.

I strongly doubt it will happen. The Israelis do not have the military means to carry out a conventional strike… 100 F-15 & 16's on a one off mission at the extreme end of their range will just stir things up and not destroy Iran's nuclear sites.

I agree with you. For Israel to be successful, the targets would need to be exposed, and they must have the element of surprise.

Iran is anticipating such an attack, and the targets are buried deeply beneath mountains.

In addition to your statement, many Zionist pilots will find themselves turned into bargaining chips in the power struggle in the aftermath of an attack. Don't you think the Zionist regime has thought of the backlash that would follow an attack which is damn sure to be a doomed failure.

You made a very important point, Anon 1:52 - let's see how well Israeli pilots are able to execute evasive maneuvers whilst trying to perform their intended mission (destroy nuclear sites), all the while being fired upon by SAMs.

After having flown such a long distance they will be low on fuel which will make it extremly difficult to break SAM locks, or to evade anti-air missiles, much less getting pulled into air engagements or pure dogfights against IRIAF. All of this will make them easy prey for the Iranian defences.

Simply running out of fuel will degrade a military jet's capability to resist and/or prevail against SAMs, much less contend with enemy aircraft.

My estimate is that several of them will simply have to bail out due to zero fuel.