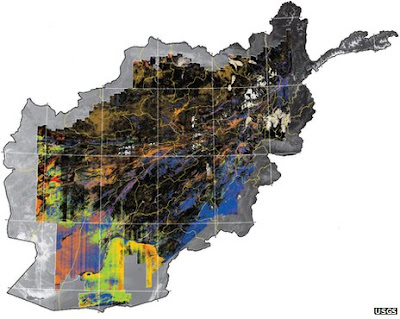 Afghanistan has become the first country whose surface minerals have been mapped from the air. The "hyperspectral imaging" produces reflections of light shone from an aircraft resulting in specific colors for different minerals.

The survey sponsored by U.S. Defense Department’s Task Force for Business and Stability Operations (TFBSO) and conducted by the US Geological Survey (USGS) has so far produced a mineral map which comprises more than 800 million data points corresponding to an area of 440,000 sq km, some 70 percent of the country.
In 2010, the TFBSO team had identified vast reserves of copper, cobalt, gold, lithium, oil, and gas in the country, estimating the value of the country’s reserves at a trillion dollars. In 2012, the first two of more than 30 world-class mines were put up for international tenders by Afghanistan’s Ministry of Mines. The exploration rights for a major iron mine was awarded to a consortium of Indian companies and a Chinese state-owned oil company won the right to explore an oil field.

Currently four large copper and gold mines are being tendered, with more than 20 companies from across the world participating in the bidding process. The early phase of the tender process for the Afghan-Tajik oil field has also begun. ExxonMobil is one of the companies that has filed an Expression of Interest to explore the vast oil field.

The recent USGS's hyperspectral imaging will now help to pin down which economically viable minerals are where.
"This is a tremendous tool for the Afghan government for locating and identifying its myriad rich mineral deposits," said TFBSO Director Jim Bullion.
"These maps clearly show the enormous size and variety of Afghanistan's mineral wealth and position the country to become a world leader in the minerals sector," Bullion added.

Photo Credit: The data distinguish a range of different minerals / USGS
Posted by Nader Uskowi at 8:42 AM

Once part of Iran then lost by the Qajars.
Until the Afghans are educated and get a democratically elected system and not religious superstition with tribal leaders and divisions the people won't benefit a single gram from these ventures.
Only China(as usual)will benefit just like they benefit from Iran's woes.

Afghanistan needs substantial source of revenues to jump start an economy savaged by more than 30 years of war. The source cannot be foreign donors, as it keeps the country forever dependent on foreign assistance. The mining industry provides just that kind of opportunity for the country and its people. Imagine if Iran did not have the oil revenues in the past seven decades, what kind of a country it would have been now.

Also, mines and oil and gas fields are long-term investments. The companies start exploration, then exploitation, on 40-50 year plan. They cannot think just about the state of politics in the next few years.

China was definitely was the beneficiary of the first oil contract. But India won the second tender, a huge iron mine in Bamiyan. And for the current four copper/gold tenders, companies from more than 20 countries are competing. For the next oil field, a huge reserve on Tajik border, ExxonMobile has formally expressed its intention to bid.

These are good days for the establishment of a huge mineral industry in the country. Hard to believe now, but Afghanistan can become one of the richest countries on earth!

It's a mad, mad, mad, mad World.
This rather optimistic estimate of the total mineral wealth which is expected to sustain a nation of 35 millions for a life time does not even come close to $4.4 trillions spent on the war!
Costs of War (www.costsofwar.org)

That's right Mr Uskowi and what scares me is if the present system remains in Iran even Afghanistan will overtake us in the economic and military fields thanks to their new found resources and Western assistance.
The clerical establishment has kept Iran in a unnatural state of retardation.
But thankfully the Iranian nation has grown wise to the regimes old tricks and want nothing but to get rid of them and replace it with a secular democratic system.
Then Iran will head nowhere but upwards and outwards towards a bright and prosperous new future.

Nice to see some development in there..

Afghanistan has already made some improvements in the last ten years. Its telecommunications systems is one of the best in the region; its making inroads in education---more than 15 Universities and one American University; transportation links to central Asia are slowly becoming operational---the train link that became operational between Uzbeckistan and Afghanistan is extremely busy, ferrying supplies to and from Europe, Russia, central Asia and Afghanistan. A new road between China and Afghanistan is being evaluated; a new gas pipeline to serve India and Pakistan's almost 1.4 billion people is under consideration; Afghanistan's rich water supplies for generation hydroelectric power is rapidly gaining traction. Afghanistan's diaspora has become much more educated and are actively participating in its reconstruction, and their annual remittence is estimated to be 3-4 billion dollars.

If I was an Afghan, i'd let the big miners come in & set up, get things rolling, then nationalise the resource and evict them.

And I am so glad you are not an Afghan; you could have destroyed their future!