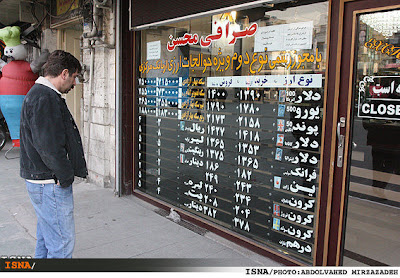 The Iranian rial has lost more than 60 percent of its market value in the past year (from 11,710 rials per dollar in July 2011 to 19,100 now). The oil revenues, the country’s major source of hard currency, have also gone down due to embargos as well as difficulties to move oil funds through the global banking system. The three-tiered system is designed to slow the rate of depletion of the hard currency reserves.

During the eight-year war with Iraq and its aftermaths, Iran experienced with a multi-tiered exchange rate as well. The system was abandoned because it created distortion in import markets and serious corrupt behavior when different rates were leveraged to make quick profit.

Ha Ha Ha Ha!!!!
Say no more!
You more or less explained it when you said the three tiered system created serious corrupt behavior.
And that is what the corrupt regime wants! To bleed the country to death and create confusion in the system so that they can steal and rape the country and blame it all on sanctions the US and the so-called Zionists.
What a shambles.