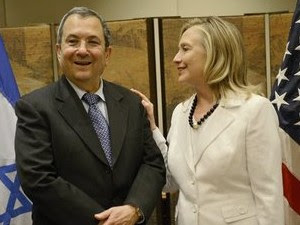 “The matter of attacking Iran has yet to be decided. However, Ehud Barak is portrayed in this context as a source pushing to the move opposed by most of the heads of the security establishment.”

One finds it very difficult to come up with a historical precedent where a smaller country for years threatens another country, without sharing an actual border, as a form of political blackmail towards a larger country in its capability not of realizing its war aims on the threatened country, but rather having only the capability of dragging the more powerful country into a long war against its own interests.

Anyone out there know of a historical analogy for such behavior in international relation?

Interesting prospective!
The article does look at barak in a vacuum, almost.
For instance, Barak's push to move on the failed camp David effort during president Clinton's last year in office could be considered an appeasement to the US president.
Everyone knows that presient Clinton desperately wanted to achieve peace between Israel and palastine before his term ends, and to that end he pushed Arafat and barak hard.
So was Barak being stubborn, or was he being a good ally and friend to the US president, despite opposition from his advisers?
Perhaps he is being a good soldier again, this time for BiBi.
An attack on Iran can not happen without someone from the left, like barak, supporting it, so in that sense, he could just be doing his part out of some custom made Barak morals.