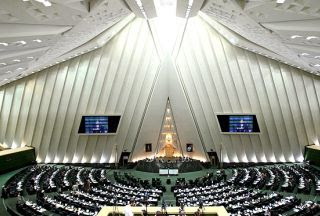 During a rare closed-door session of Majlis on Wednesday, top Iranian officials briefed lawmakers on the effects of sanctions on the country’s economy. The ministers of oil, economy, commerce and the director of the central bank addressed the session. The Iranian constitution allows closed-door sessions in urgent conditions affecting the country’s security. IRNA quoted Speaker Ali Larijani as saying the briefing was “to assess the economy and production situation.”
Iran's Supreme Leader Ayatollah Ali Khamenei had said earlier this week that Western sanctions are not having much effect.
Posted by Nader Uskowi at 1:32 AM

The Tavileh should put their heads down in shame.
But that's one thing they don't have.

What Khamenei stated was that sanctions wouldn't effect Iran's position on the nuclear issue, and that general consumption should be observed, as well as politically closing ranks in the face of the economic war being directed against it. This is analogous to Churchill's advocation in 1940.

We're observing price increases in Iran but have yet to see widespread rationing, as was the case of Britain in 1940.

That the Iranians are paying a price for what they see as their principled positions on Israel and their own nuclear issue, Khamenei has publicly acknowledged on more than one occasion.

The ayatollah had said the sanctions will not have effect on the country's nuclear policy, and I should have said exactly that, and you're right. But also the stated goal of the sanctions are chaining Iran's policy. So in that sense, they have had no effect. (I am sure the leader understands the economic consequences of the sanctions, independent of nuclear policy).

Reportedly there is a debate inside the country on the effect of the sanctions and the current policy toward the U.S. (i.e. nuclear policy). Let's hope cooler heads prevail on all sides and we'll witness a reduction of tensions.

No Mark Pyruz this isn't the peoples principled position on Israel and the nuclear issue.
The peoples principled issue is freedom from the regimes tyrannical fascist ideology with all its oppressions.
The Israel issue is a regime ideological belief which was imposed on the brow beaten Iranian nation.Anything else is just pure nonsense.
As for your claims trying to compare Churchill and his government to this anti Iranian fascist theocracy is a bit rich.
The Iranians are paying a heavy price by the very existence of this fascist Islamic theocracy.

The Russians are going to improve their trade ties with the US.
Meanwhile Iran is being supported by both Russia and China to stay isolated and be ruled by a bunch of onion heads.
Funny how China a communist state is one of the biggest exporters to the US and the West and now Russia following soon behind them.
Try telling that to those empty headed cretins that are sucking up to those turnips in Tehran.

---"We're observing price increases in Iran but have yet to see widespread rationing, as was the case of Britain in 1940."


what a strange comparison..


What sense is their comparing a small island engaged in a desperate war.....to a country not at war and facing sanctions that are just getting serious.