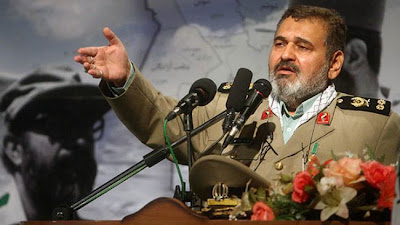 Iran's Chairman of Joint Chiefs of Staff Major General Hassan Firouzabadi said in Tehran that Israel’s Mossad controls CIA and MI6. He also warned that the “Zionists” are attempting to dominate the world.

“Today all spying and intelligence services of the enemies of Islam are acting in unison, and evidence indicates that Mossad, as the intelligence agency for the Zionists, has taken control of CIA in the US and MI6 in Britain,” Gen. Firouzabadi said (IRNA, 28 July).

“The Zionists plan to occupy all the Palestinian territories including al-Quds (Jerusalem), establish a government, and take control of the world at the same time,” Firouzabadi added.

No wonder that no one is willing to give them the benefit of doubt on the nuclear issue ...

His comments are referenced to the Israel security bill signed today by President Obama.

It's really shame and stupid enough for the U.S.'s CIA and Britain's M16 intelligence agencies to be under full control and order of the so-called 'Mossad' and their master, the world's most evil and damned nation of the Zionist Regime of Israel which is almost unseen on the surface of the earth. What pea-sized brains of the West's intelligence!

His comments were very clear, leaving no doubts as to his thinking: Mossad is controlling CIA and MI6. Israel is moving to take control of the world.

It is disturbing that with a state of mind like that, this man is commanding the Iranian military.

of course the mossad does not control CIA or MI6 unless in Near east cases.

no doubt the US, EU follows israel in every step.

nader isn't it simply analogous to the constant western refrain that iran is the worlds' biggest exporter of terrorism?

Yeah sure,Israel controls everything!
Including the earths orbit around the sun.
Talk about paranoid!

Mr. Uskowi his remarks might be disturbing but yet Koch Brothers and Adelson are pouring $millions into politics, helping Israel Lobby, choosing candidates to support from very local to state and white house. I wonder why is it so hard to see the so called "Friends of Israel" have so much influence in US politics?

I expect the commanding general of the armed forces not to make pronouncements that are not real, and I am sure Firouzabadi feels same way. Why is it disturbing? The general must be getting his information from the military intelligence and base his analysis on the info he gets. If this is in fact the type of intelligence they have, their future actions could be based on wrong information and they might take steps that they normally would not have taken if they had the right intelligence. In a tense situation like Iran’s, acting on wrong intelligence could result in catastrophe, hence its disturbing nature.

Aside from claiming that Mossad controls CIA and MI6, Firouzabadi makes a more amazing pronouncement: Israel is in the process of controlling the world. The military intelligence probably did not advise him on this last prediction; the general could be just delusional. If the head of IDF had said that Iran will soon control the world, I would have said the same, and expected his quick retirement from the Israeli military.

Mr. Uskowi, It is factual that the in past few decades the election process in US and partly in Europe has been influenced by political groups financed by Israel lobby/friends. It is also factual that many in the legislative branches of western governments can only get elected if they raise campaign money from the same sources. Laws are passed by those legislators and intelligent and military and security chiefs are appointed by those elected in executive branch. It is also a fact that since the "citizens United" US supreme ruling court case the Influence of "Koch brothers", "Sheldon Adelson" ... have increases many folds, Hence Mr. Romney goes to Israel and while Mr. Adelson sets up campaign events to raise more money while Romney is there. The connections are clear, The money trail is rather obvious, although harder to track since US supreme court ruling, and $millions will not be spend to support candidates and not expect something in return.


you understand very very little about US politics.... The Koch Bros and Sheldon Adelson have little actual influence as they are staunchly opposed to the Democratic Party, which controls the presidency and will continue to control it.
As well, they are far to the right of the people who are the established leaders of the Republican Party and will continue to control the republicans.

and BTW, the Koch brothers, as you seem not to know, are not Jewish and are staunch Christians of German ancestry....they are not now and never were part of any "Israel Lobby".


your howler of a mistake would be akin to saying that the Iranian theocracy are admirers of Al Qaeda's religious views and political aspirations.

Your comments are very well taken. But they do not support the assertion that the Israeli intelligence agency is controlling those of the U.S. and Britain, and it does not support the assertion that the Israelis are taking control of the world. These were the points of discussion in this post, not the power of the Israeli lobby in the States. They might be a powerful lobby, but they don’t control CIA, MI6 and for that matter the entire globe!

The CIA is controlled by a force more sinister, greedy and inept than the Mossad...


As for the Zionists controlling world, to quote Andrew Klavan:
"Some anti-Semites believe the Jews already run America. But that's ridiculous; if the Jews ran America we wouldn't be 14 trillion dollars in debit."