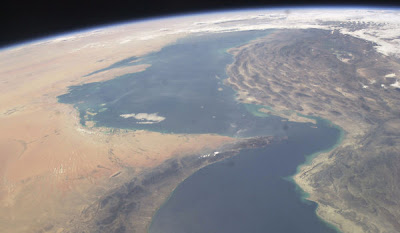 The New York Times reported today that the U.S. has deployed significant military reinforcements into the Persian Gulf to deter the Iranian military from any possible attempt to shut the Strait of Hormuz. The U.S. military has also deployed stealthy fighter jets capable of striking deep into Iran, the Times reported.

The reinforcement ships designed to vastly enhance the U.S. Navy’s ability to patrol the Strait of Hormuz — and to reopen the narrow waterway should Iran attempt to mine it, the report says.

“The message to Iran is, ‘Don’t even think about it,’ ” one senior Defense Department official said. “Don’t even think about closing the strait. We’ll clear the mines. Don’t even think about sending your fast boats out to harass our vessels or commercial shipping. We’ll put them on the bottom of the gulf.” (The New York Times, 3 July)
The U.S. has also deployed the stealthy F-22s. These fighter jets, along with F-15Cs also deployed, will give the military the capability of attacking coastal missile batteries that could threaten shipping, as well as the reach to strike targets deep inside Iran.
And the Navy has moved a converted amphibious transport and docking ship, the Ponce, into the Persian Gulf to serve as a logistics and operations hub and as a base for Special Operations forces.
Senator John Kerry, the chairman of the Senate Foreign Relations Committee who frequently acts as personal envoy of President Obama to the region, said that the administration must strike a fine balance between positioning enough forces to deter Iran, but not inadvertently indicate to Iran or Israel that an attack on Iran’s nuclear sites is imminent or inevitable, The Times reported.
Photo Credit: The Strait of Hormuz and the Persian Gulf beyond it, as seen from the International Space Station in 2003. Iran is to the right. NASA/AP/New York Times.
Posted by Nader Uskowi at 4:42 AM

It is no other than the U.S. well-known psychological warfare campaign and propaganda. If the U.S. really wanted to take out the whole nation of Iran, it should bring all its military equipment and army down to iranian soil and see if god is on its side. Next year will definitely be the U.S.'s 34 long 'barking' years.

The U.S. is playing with fire.

----"“The Majlis Committee on National Security and Foreign Policy has drawn up a plan which puts emphasis on blocking the passage of tankers carrying oil through the Strait of Hormuz to countries that imposed sanctions on Iran,” a member of the committee Ebrahim Aqa-Mohammadi said on Monday.

He added that the plan has been codified in response to oil sanctions imposed on Iran by the 27-member union. "----

rather odd POV you've got.

Iran has backed up its threats through its proxies in the past. Don't think that Iran will not make good on its threat.

Don't think that Iran will not make good on its threat.


Iran won't be able to hide behind those proxies this time, friend as proxies aren't going to be able to attack a US fleet or two, so whatever proxy action draws blood will be amply paid for with Iranian military blood in consequence.

THAT makes this time different than times past. with a different outcome predictable, different actions by Iran becomes much more probable.