The Colonel – By Mahmoud Dowlatabadi 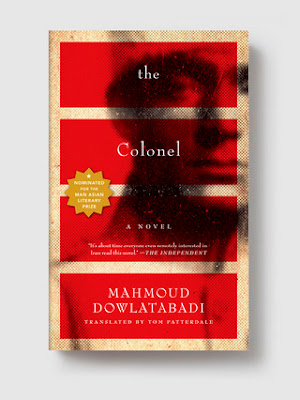 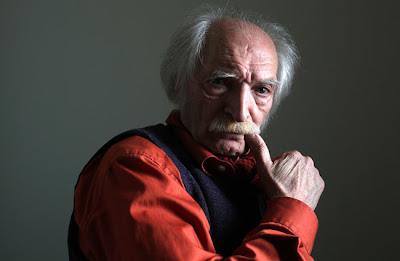 The Colonel, a new novel by master of Iranian letters Mahmoud Dowlatabadi is published in the US by Melville House. Ten years in the writing, the novel tells the stirring story of a tortured people forced to live under successive oppressive regimes, and it’s banned in Iran.
As an introduction to Dowlatabadi, the New York Times says:

After being arrested in 1974 by the Savak, the shah’s secret police, the Iranian writer Mahmoud Dowlatabadi asked his interrogators just what crime he had committed. “None,” he recalled them responding, “but everyone we arrest seems to have copies of your novels, so that makes you provocative to revolutionaries.” (The New York Times, 2 July)

And those now in power continue to regard him and his work as subversive.
THE COLONEL
A NOVEL
MAHMOUD DOWLATABADI
TRANSLATED BY TOM PATTERDALE
Melville House
http://mhpbooks.com/books/the-colonel/

"a son who fell during the 1979 revolution; another driven to madness after being tortured during the Shah’s regime; a third who went off to martyr himself fighting for the ayatollahs in their war against Iraq; one murdered daughter, and another who survives by being married to a cruel opportunist."

I guess our family is fortunate, we've none of this in our family back in the old country, or our extended family or our wider social circles. Just ordinary folks going about doing ordinary things, like everybody else. Do they engage in periodic griping? Not much more than ordinary folks do here, in California.

As far as I'm concerned anybody that was of the left in Iran and supported that dirty Khomeini at all costs was self inflicted.
I'm really sorry but thousands of families suffered after the night of the revolution by the hands of the Khomeini thugs and the MEK,Tudeh traitors but they didn't live to write books about it.

Don’t you agree with me that the Shah’s government, acting as the enforcer of the Cold War in the region, destroyed all leftist and nationalist parties and organizations, leaving the mosques to operate as social and later political organizations and from the late 70s as the centers of opposition? There are indeed scores of Iranians who suffered in prisons and were tortured under both regimes. The novel is their story, and sloganeering cannot wipe out their stirring story.

This is not about sloganeering.And my family suffered under this regime.
Granted the Shah did stop leftist parties from participating in parliament and that was a political mistake which lead to the Mosques and his downfall.
But when Bakhtiar became prime minister during the crises,what did the leftist and Nationalist party do?
Still side with Khomeini despite the Shah had left the country and Bakhtiar disbanding SAVAK and freeing all remaining political prisoners.Thus stopping all political reform of the country and opening the way to a bunch of primitive savages.
At the end of the day Khomeini and his band of cut throats used Iranian sensibilities to overcome the forces of reason.
We should move on and deal with this regime not keep harking back to 1953 or think Iran was like Holland during the Qajar and Reza Shah took the freedoms away according to Mosheri.

Thanks so much for your comments and clarification. I agree with you about the negative role played by most of the left and the nationalists in opposing Bakhtiar. But let’s put things in perspective. Bakhtiar was a leader of the nationalists and his cabinet was full of nationalists and National Front ministers. So it was not true that all nationalists came out against him, at least a minority did not, and indeed the nationalists formed Shah’s last government. But shah named that opposition to form the government too late to make a difference, only few days before he left the country. But that time the game was practically over. If Bakhtiar and his National Front government had come to power after Hoveyda, we could well have witnessed a different outcome.

BTW, I was one of those prisoners you are referring to. I was freed from SAVAK’s Komiteh prison on the order of Prime Minister Bakhtiar when he disbanded SAVAK, for which I am always grateful.

Iran during the Shah was developing economically, and very rapidly, and if political reforms had started years earlier it could have turned Iran into an advanced country. But love for power and extreme corruption stopped that regime from reforming itself, which ironically at the end cost them their very power, their finances and unfortunately in so many cases their lives.

Thank you for your reply.I am glad that Prime Minister Bakhtiar freed all the political prisoners.
The way he was murdered saddens me to this day.
I agree with you that if the National Front Party was allowed to form a government after Primer Hoveyda the situation would have been completely different today.
Unfortunately the Shah thought by strengthening the military he could secure his reign but in reality the country needed political reform as well.
Unfortunately in today's Iran political reform is impossible and the only solution besides bloodshed is strikes boycotts and non cooperation of the people against the regime.