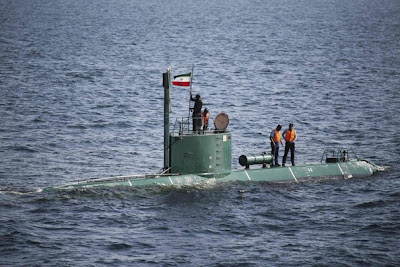 Iran is rapidly gaining new capabilities to strike at U.S. warships in the Persian Gulf, amassing an arsenal of sophisticated anti-ship missiles while expanding its fleet of fast-attack boats and submarines, the Washington Post reported today.

To read the article, please click here.
Posted by Nader Uskowi at 8:05 AM

Propaganda created by the Pentagon to justify arms sales to Persian gulf countries.
Pentagon also said Saddam's republican guards were formidable and look what happened to them.
Facts are if the regime in Iran is dumb enough to attack US fleet in that region it will be the last thing they are likely to do.
Japan tried that trick in Pearl Harbor and we know where that lead too.
I think Iranian people have bigger things to worry about instead of focusing on this type of false flagging issues for example the daily lives of Iranians struggling to make a living.
Iran is a rich country but unfortunately is run by rotten managers which have only interest in lining their own pockets and using religion to suppress freedom.

Couldn't read page 3 of the WP article without registering, but there's nothing new mentioned on Iran's military within the first two pages. The "Persian Gulf" anti-ship ballistic missile has been known for some time now. Really, the more interesting details in the piece pertained to the USN's buildup, rather than Iran's.

The big questions analysts should be asking is: what potential countet-strike assets does Iran's military possess that we don't know about? It's what they don't show during exercises that U.S. policy makers and analysts should be thinking about, rather than simply trotting out pretty much the same tired threat analyses every year for the media to consume.

The U.S., now and then, is said to be the world's leading superpower and the most powerful and strongest military that ever existed on the surface of the earth. It is too strong when it comes to confronting those weak, hapless and defenceless nations and countries, militarily, without any hard retaliations and is almost unchallenged. But instead, when it comes to messing with the real military power and might of IRAN, it is no longer as the mightiest as being well said, described and stated, previously and currently. WHY? No one actually knows what Iran does really have in its possessions. Only God knows.

mat, still flogging "No one actually knows what Iran does really have in its possessions. Only God knows."

God considers the Iranian government an enemy of God
and has made it known that the Ayatollah's advisors are practicing sorcery.

No new weapons for them.

The problem is that the US knows what Iran possesses which consists of a whole load of rust which is kept together with a whole lot of tape.