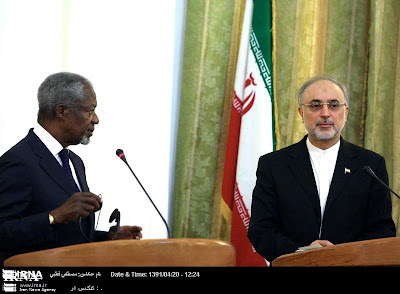 UN-Arab League envoy Kofi Annan met with senior Iranian officials today in Tehran in an attempt to solicit their support for his Syria peace plan.


"My presence here proves that I believe Iran can play a positive role and should therefore be a part of the solution in the Syrian crisis," Annan said at a news conference with Iranian Foreign Minister Ali Akbar Salehi.

Salehi has consistently opposed foreign intervention in the crisis, arguing that it is for the Syrian people to chart their future during the scheduled presidential election in 2014.

“We should not worsen the crisis,” said Salehi. “God forbid, one wrong measure, one wrong decision can have catastrophic consequences for the region and the whole world.”  (IRNA, 10 July)

Salehi said one thing correctly, "God forbid".
Because that is precisely what is going to happen to Assad and Islamic regimes foreign policy,torn to tatters.

what can show more the declining the power of US in middle east , as if Anan seeking iran aid in Syria

Iran's or should I say Islamic regimes power is declining in Syria.
Annan has only gone to Iran to tell them the game is up and the Syrian people will be free from Assad regime very soon.