Towards A New Scenario on Iran: An Israeli Perspective 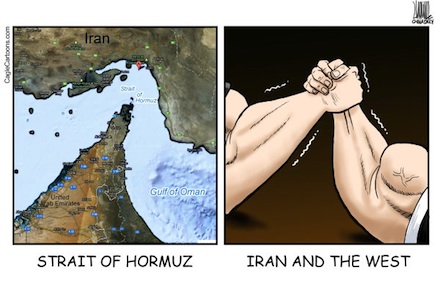 “The scenario talked over the last years, according to which squadron after squadron of the Israeli Air Force jets are attacking Iran’s nuclear sites, does not look like the most relevant one.”

Towards a New Scenario

The author is mistaken. Iraq is now a closer ally of Iran than Syria. Syria is in flux.

Aside from that, I really don't understand this Israeli author. He has not put forward a "new scenario." Rather he posits just more of the same we've been hearing for years now.

As I've stated for some time now: every time you hear an Iranian military or political figure mention Iran's strike capabilities and the SOH, follow the corresponding spike in the price of Brent crude. Here in northern California, after last week's talk of strikes, counterstrikes and the SOH, the price of fuel has again risen about 20 cents a gallon.

Want a real "new scenario on Iran" for a change? Try a Nixon to China moment being applied by the U.S. to Iran. Visualize peace and rapprochement.

Donot be impresed by nonsense artikel and medis propaganda

Iran will never close hormuz in non war condition, and wihout any provocation

Strait of hormuz, is free international water
iran has no right to close.
If iran close the strait without any reason and against international law. It lose all its allies China,russia,india,...

The series of IranEdge articles reprinted here are meant to show Israeli perspectives on Iran nuclear issues, and of course not those of Iran or the U.S. For months, the talk of town in Israel has been the possibility of, as the author puts it, “squadron after squadron of the Israeli Air Force jets are attacking Iran’s nuclear sites.” The author argues here that the scenario does not seem to be relevant. Instead any military conflict with Iran would involve the U.S. and not Israel.

Of course the main purpose of the blog posts is to invite discussions on the topics, here too. Is the assertion by the author that an Israeli air attack on Iran nuclear installations not being relevant correct? Why and why not?

Are you serious?
Syria is the main ally of the Islamic regime.
Why?
Because the Syrian regime provides the access to the Lebanese Shiit militia Hezbollah.
And the Islamic regimes policy is based on bashing Israel and wining the Arab streets.
But once Syrian regime is removed those policies will be flushed away and Islamic regime will have no allies in the region.
There is no way Iraq can replace Syria as a close strategic ally of the Islamic theocracy.
It's typical of regime apologists such as you to brush away major problems that are facing the theocracy and claiming that Syria is in flux and of no consequence to the regime in Tehran.
Arab Iraq is and has been the traditional enemy and rival of Iran since its inception.
And after the downfall of the Islamic regime the mullahs can go back to their motherland Iraq and live happily ever after.
I don't expect any replies from you which is just as well because you know I speak what is true not nonsense propaganda like some of the little gits which write on this forum.

Dont ask if Pyruz is serious..just don't take him seriously.

His assertion is an obvious untruth and can be taken only to mean that he accepts that Syria is now lost to iran as an ally, that the removal of Hezbollah from power to Lebanon is coming shortly and that Iran has no true ally left to it other than whatever it can coerce from a very divided and powerless regime in Iraq.

"The author is mistaken.Iraq is now a closer ally of Iran than Syria.Syria is in flux."

Reminds me.I need to go to the shop and buy some DOUGHNUTS.