Clinton: U.S. Will Use ‘All Its Power’ to Prevent Nuclear Iran 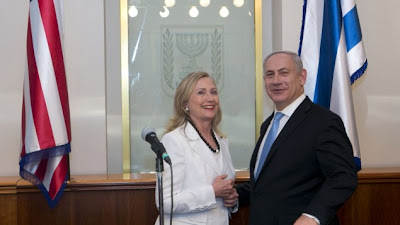 Secretary of State Hillary Clinton, wrapping up a visit to Israel today, said the U.S. will do everything in its power to prevent Iran from acquiring a nuclear weapon. Clinton added that although diplomacy is going nowhere, Iran still has time to “make the right choice.”

“Iran’s leaders still have the opportunity to make the right decision,” Clinton said. She added that, “We will use all elements of American power to prevent Iran from obtaining a nuclear weapon.”

“The proposals (from Iran) we have seen thus far are nonstarters,” Clinton said. “Despite three rounds of talks, Iran has yet to make a strategic decision to address the international community’s concerns. So we are pressing forward in close consultation with Israel. I think it is absolutely fair to say we are on the same page trying to figure our way forward to have the maximum impact.” (The Times of Israel, 16 July)

"Nonstarters" from either direction are as follows: Iran holding firm to its rights under the NPT, and the U.S. led policy of exorcising those rights.

“Today, the enemies cannot tolerate the progress and enhancement of the Islamic Republic of Iran's military and defense power in different fields including missile [technology], the naval power of the IRGC and advances that have taken place in these fields,” Maj. Gen. Soleimani said on Monday.

Over the past years, Iran has made important breakthroughs in its defense sector, attained self-sufficiency in producing important military equipment and systems and enhanced the preparedness of its forces by holding various drills.

Different classes of submarines, including Tareq and Qadir, the newest ground-to-sea missile systems and torpedoes were employed in the maneuvers.

if USA attacked Iran it will mark the end of the imperialist. US is descending toward bankrupcy and only by printing alot of US dollars together help from idiot saudi king preventing the collapse of USA. if china released 10% of its US bond for sure US will collapse.mark my words


A senior Iranian military commander says the Islamic Revolution Guards Corps (IRGC) does not dread the giant US aircraft carriers in the Persian Gulf and simply views them as “pieces of scrap metal.”

“The IRGC has never been terrified of large US aircraft carriers and the thunder of missiles launched by the United States and the extra-regional enemies. These munitions, in the viewpoint of the IRGC, are nothing more than scrap metal,” the deputy commander of the IRGC, Brigadier General Hossein Salami, said on Tuesday.

The IRGC staged the Great Prophet 7 war games in the north central Iranian province of Semnan from July 2 to 4.

@mat
That "general" needs to be back on his medication!