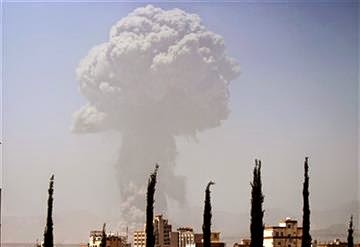 Saudi Arabia said today it was halting a nearly month-long bombing campaign against the Huthi (AnsarAllah) insurgents in Yemen. A Saudi government spokesman said the objectives of “Operation Decisive Storm” have been “achieved,” asserting that a takeover of Yemen by the Huthis had been prevented.

Meantime, a senior Iranian official said in Tehran hours prior to the suspension of Saudi airstrikes that he expected a ceasefire in Yemen to be announced.

“We are optimistic that in coming hours, after many efforts, we will see a halt to military attacks in Yemen,” said Hossein Amir Abdollahian, Iran’s deputy foreign minister. Iranian Foreign Ministry later welcomed Saudi announcement, calling it “a step forward.” (IRNA/NYTimes, 21 April)

Saudi and Iranian announcements within hours could suggest secret negotiations between the two countries on the issue. If so, a ceasefire and peace talks between the warring factions could soon follow.

Another glaring defeat of "airpower". The Saudis now have major problems for a long time as defeat and lost face is not a good thing in the Arab world.

Saudi has successfully projected his power with Iranian in check. Minimal casulties , full control on gulf of Aden. Surprised Iran with quick actions and no major response by Houthis.

Saudi along with Egyptian and Sudanese foot Soldiers could go in on the ground sweep Yemen Clean of Iranian supported insurgents - there by end Mullahs machinations in their back yard. What could Iran do? Nothing.

Akhoonds can pay up since they wish to control Yemen...Expanded influence comes with greater costs...!

The Arab order in the Middle-East that was sustained for almost a century , is crumbling and crumbling fast . Nobody seems to have any idea what's coming next or what should replace the old decaying order .Egypt , Saudi Arabia or Iran hardly represent a beacon of hope for countless civilian non-combatants caught in the middle .
The pundits who for the longest had agitated for an end to Pax-Americana in the Middle-East, might be deluded to think that they found an answer to their prayers at long last .Looking at the rampant carnage and a parade of the despicable characters jockeying to fill the void , their celebration would be a bit premature . None can set forth a credible alternative to America's leadership . Unfortunately for Yemeni and countless other innocent souls , none is in the offing .

Seems everyone misread the Saudis - they never said the end of operation DS would be the end to airstrikes. It's only the beginning of the new phase.

And I'm laughing so hard at all the anti-Iranian commentators here, who go so far to hate Iran that they're willing to support the Saudis in a huge strategic blunder that has thus far cost the lives of hundreds of Yemeni civilians and destroyed Yemeni infrastructure. Do you people think the Saudis are bombing Yemen to free its people? Saudi Arabia is the root cause of this conflict, not Iran.

The root causes of Yemen's problem are the Huthis, and corrupt figures like Hadi and Saleh. It is their country, and they have made a mess out of it.

Saudis are intervening because the threat of the Huthis and Iran so close to their border is so real for them. We can recall last summer when Iranian air force, artillery, and armor units joined the Quds Force-led Shia militias in a foreign country to stop possible ISIL advance toward the Iranian border.

As I said in the main part of the post, yesterday's announcement by the Saudis to halt what is now understood as the first phase of their campaign and Iranian announcement of a pending ceasefire in Yemen within hours of each other signal a secret deal could have been worked out between Iran and Saudi Arabia, which probably averted a major military showdown over the approaching Iran's IRGCN convoy toward Yemen. Saudis ended its major bombing campaign, and we should see what the Iranians would do in return.

At the end of the day, the problem in Yemen is local and should be solved by Yemeni political factions. They have to find a political solution to the mess they have created in their country, hopefully under UN supervision, to bring back some form of normalcy to the lives of Yemenis.

As history has shown, groups do not rebel unless given good reasons.

In the 1990s, Saudi Arabia began trying to spread Wahhabism and Salafism in the Zaidi Shiite north, paying for pricey mosques and community centers. Saleh’s secular nationalists allowed this move, since they thought quietist Salafi Sunnis would be more loyal to the central government than Zaidis, with their traditions of rule via the theocratic Imamate. You had a sort of secular-nationalist alliance with Saudi fundamentalism against rural Zaidism. In the 1990s when Saleh allowed parliamentary elections, the Sunni fundamentalist Islah Party emerged as the most important civil party, again demoting the rural Zaidis. Ultimately the Houthis went into rebellion against Sanaa, accusing the government of betraying them by allying with Wahhabi Saudi Arabia and of neglecting the development of their regions because of antipathy to Zaidi traditionalists.

Of course, the Saudis pass this off as nothing more than a Shia revolt instigated by Iran. For Saudi Arabia, Iran sneezing is evidence enough of an existentialist Shia threat against the kingdom. The Shia's goal is to gain what they consider to be their basic rights. Furthermore, the Yemenis, who were forced to surrender part of their lands to the Saudis, resent Saudi overlordship. The Saudis have bought the loyalty of various Yemeni tribes and have tried over the years to keep them disunited, so as better to control them.

In regards to the Houthi movement in particular, Saleh’s GPC party won a plurality in 1993, but in trying to ensure a weakened opposition Saleh negotiated a deal with Hussein al-Houthi, the leader of the al-Haq Party. Houthi was to distance himself from Haq and back the GPC in return for support from the ruling party. Houthi did as he was asked, and was stabbed in the back in the 1997 election, when Saleh’s office heavily campaigned against him, costing him his seat in parliament. He returned in 2001, and quickly became an influential religious leader, aiming to unite the various independent clerics of Zaidi Shi’ism under a single banner. And he was successful. Saleh turned to war and assassinated Houthi. Hussein’s father, Badr al-Din Houthi started an uprising in 2005, and his brother Abdul Malik Houthi started an even bigger one in 2007. Their demands centered around equal treatment for their homeland, around Sadaa, which always got the short end of infrastructure investment. By 2009 the region was in full-scale war, with Saleh vowing to defund public schools and all other basic social spending to pay for weapons to wipe the Houthis out.

So I don't know how you can pin this on anyone but the Saudis and their main man in Yemen, Saleh. Who funded the cancerous Wahhabi preachers and alienated the Zaidis? Who backstabbed the Houthis and used force to exterminate them?

The Saudis need to wake up and smell the coffee. This is an indigenous rebellion brought upon by their decades of meddling in Yemeni affairs, and Iranian influence in this conflict has been minuscule.

>Saudis ended its major bombing campaign, and we should see what the Iranians would do in return.

What the heck are the Iranians doing in the first place? Don't buy Saudi propaganda. The dirty Safavi majusi Persians in Iran aren't after conquering Yemen.

Generally if you start a war you`re considered liable morally if not financially.Its good to see that the saudis achieved nothing apart from embarrassment with this debacle

AnonymousApril 22, 2015 at 6:25 AM
The saudis achieved nothing,were the houthis stopped,did they surrender,was hadi returned to power?,the saudis didnt achieve a single war aim and if thats the best that saudi power projection can do then its pretty weak just like the rest of their military and nation

The Saudis are still bombing. Any idea where this is heading?

What they are saying is that precision bombing against military targets and Huthi movements to expand their positions will continue in the "new" phase of military ops. Although they say the airstrikes will be only a smaller part of what they are doing during this phase, and special ops and maritime security/blockade will play important roles. Their strategy is not all that clear to me. What is your reading from there?