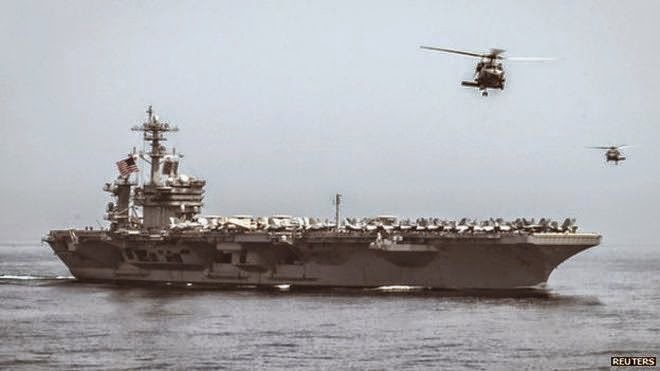 A nine-ship Iranian convoy of seven freighters and two IRGCN warships suspected of carrying arms to the Huthis in Yemen today reversed course and now is heading northeast in the Arabian Sea in the direction of home. The convoy had dropped anchor near Yemeni border with Oman in the Arabian Sea. (AP/Fox, 23 April)

The move by Iran avoids showdown with U.S. Navy in the Arabian Sea and is also a possible quid pro quo for Saudi halt in major air campaign.

UPDATE (Friday 24 April): U.S. aircraft carrier USS Theodore Roosevelt and its strike group are also heading back to the Persian Gulf after the Iranian convoy reversed course on Thursday and headed home. Them moves indicate that a potential stand off between the two navies has been averted.

quite wise as Iran doesn't want to again be caught exporting weapons to Shia militias. Iran prefers to subvert Arab governments while pretending to innocence,

So the attack on the helpless barge scenario didn't come to fruition?

By this action to prevent Iranian help to Houthis, chances for the nuclear agreement have further diminished........