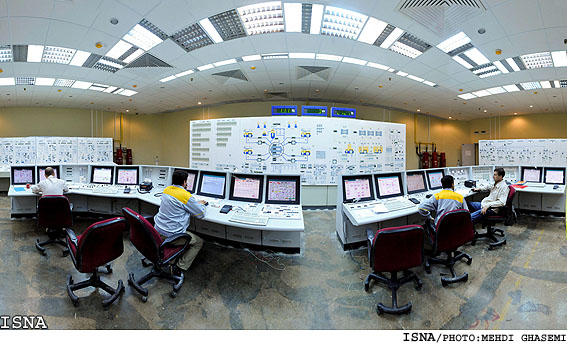 “Bushehr is currently operating at 100-percent capacity and the process of preparing it for transfer to the project originator is concluding,” Rosatom's Sergei Kiriyenko said.
Rosatom's construction division, Atomstroyeksport, finished construction at Bushehr, after a German company started in the mid-1970s but pulled out of after the 1979 Iranian revolution. Tehran signed the Bushehr contract with Russia in 1995. Bushehr reached full capacity at the end of August 2012.

In real terms Iranians have been running it for a year and have made many improvements including an upgraded digital control center.

Iran seen reaching 'critical capability' for nukes without detection
WASHINGTON - The Institute for Science and International Security determined that Iran would gain what was termed critical capability in mid-2014. In a report, the institute said Iran would be capable of producing weapons-grade uranium without detection. "Iran would achieve this capability principally by implementing its existing, firm plans to install thousands more IR-1 centrifuges, and perhaps a few thousand IR-2m centrifuges, at its declared Natanz and Fordow centrifuge sites."

Hopefully the first of many

Hopefully it wont get attack by Israeli terrorists.

There is no need for that because the technology scrounged for its construction is unreliable.

your worries about the place should center on seismic activity again damaging it.

it would be weapons development sites that would be attacked.

Rest assured, nothing will happen and Iran will develop better and more advanced reactors, even miniaturizing them.

You mean something the US was doing over sixty years ago?

Sorry to break some your anti-Iranian Achy Breaky Hearts, Russia has just announced that it will be building more nuclear plants in Iran.

"Iran held consultations with the Russian side and soon an agreement of mutual understanding will be signed for the construction of a new power plant," the Iranian Mehr News Agency quoted Salehi as saying Sunday. Salehi said Iran required nuclear power for electricity and medicine.

Anon 10:29 AM, Iran's weapon development program is a breech of Iran's NPT obligations and the fact that other nations have nukes and are not signatories to the NPT does nothing to change or excuse Iran's lies and schemes.

AnonymousAugust 13, 2013 at 4:34 PM
And what "weapon development program" would this be?,iran is in full compliance with its npt obligations and all its fissile material is accounted for

AnonymousAugust 12, 2013 at 10:29 AM
Well said,the double standards and hypocrisy so typical of the west are truly disgusting

don't hold your breath waiting for it to be built.

Iran has been pushing the project for more than 8 years.... and it's still not happening.

Anonymous August 13, 2013 at 4:34 PM, it means that those other states are in no position to point fingers at and lecture Iran. They have no right.

Its being constructed as we speak,despite the best efforts of the west and its bootlicks,I imagine those 2 reactors will get built as well

“we will discuss the project with the new Iranian cabinet for seeking the entire financing,” says Petroleum minister.
As the government is aware that US sanctions may hamper financing for the Iran-Pakistan gas pipeline project, it has decided to place a request before the new Iranian government for completely financing the vital energy project.
Iran had committed to the previous PPP-led government a loan of $500 million for laying the pipeline in Pakistan, which would cost more than $1 billion. The two governments also agreed to award construction contract to Iranian firm Tadbir Energy. However, the contract could not be signed in the absence of sovereign guarantees by Pakistan.

It's taken the regime with their Russian buddies twenty years to build this single reactor.By the time the other two are built the advanced countries will be using fusion energy and mining the asteroids in outer space.

Iran is working on fusion.

Iranian team to collaborate with US company on nuclear fusion project

And you honestly believe the US will pass on the hard earned knowledge to a bunch of terrorists?

AnonymousAugust 16, 2013 at 7:37 PM
You mean like it did with israel or israel did with apartheid south africa?