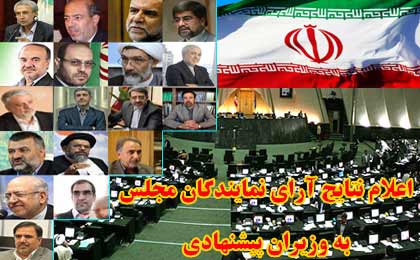 Iranian parliament, the Majlis, approved the cabinet ministers proposed by President Rouhani, with exception of three ministries of Education, Science and Technology, and Sports.
Javad Zarif is the new foreign minister, in charge of the new foreign policy of “moderation and realism.” Bijan Zanganeh will lead the oil ministry, the first non-IRGC officer to control the country’s oil industry in many years.

Meanwhile, the former foreign minister Ali Akbar Salehi will head the Atomic Energy Organization of Iran (AEOI). No announcement for the position of chief nuclear negotiator has yet been made.

the rejection of three nominees is the headline, NU, not the claim that they approved the others.

you put yourself on shaky ground by touting Rouhani's chances to change the direction of
Iranian policy and failing to emphasize that he's already being hobbled.

Why haven't you mentioned the fact that the future "minister of justice" Mostafa Pourmohammadi is a known criminal that was reponsible for the execution of thousands of opponents of the terrorist regime?

It will be wonderful to see iranians realize that all of Rouhani's bull s was just tarof. That will happen in about one year I estimate.

Iranian culture is essentially one of lies. It's not Islam's fault or the west's fault. Until they fix that it will be a repeating cycle

It is shameful and morally unacceptable that not even one single woman was allowed into the cabinet whilst the Mullas, a tiny portion of the total population , occupy nearly 20% of the total cabinet seats. I sometime wonder whether the ruling elites in Iran genuinely love and have aspiration for their wife, sisters and daughters to be rewarded with the opportunity to contest or hold the highest office in the land .

Iran is facing a crisis that has been partly caused by eight years of disastrous administration of Mahmoud Ahmadinejad. I always believed that the country could not isolate itself globally and populist sloganeering could substitute as policy. Rouhani’s election created the hope that a more moderate and pragmatic foreign policy could bring back the normalcy. The reality is that the current economic crisis facing the country cannot be resolved solely through government’s monetary and fiscal policies and the international sanctions must be lifted as the first step to economic recovery. Rouhani’s foreign policy has a much better chance to manage this challenge. The continuation of Ahmadinejad’s presidency, for example the victory by Jalili in the presidential election, would have made the situation worst and could take the country to the brink of military conflict with the West. It’s the foreign policy of the country that is of critical importance these days, not the selection of someone who ordered the mass killings of political prisoners as “justice” minister (the Judiciary is controlled by Sadeq Larijani, who is of the same mold as the “justice” minister.)

Forget about it! As long as this regime is in control of Iran there is no "hope" for real change.Ahmadinejad was the monkey so is Rouhani and the organ grinder is still Khamenei.Same donkey different coloured collar.

please, NU, I understand your hope, but you surely can't truly cling to the idea that little Mahmoud has been in control of Iran's foreign policy. you know better than that.

The damage he did to Iran's global standing is beyond repair in short run; the worst president in the history of the Islamic Republic.

Come on now! You know better than that to claim that this or that person was the "worst president".Don't you know yet that it is the valih-e-faqih that makes all the major decisions?