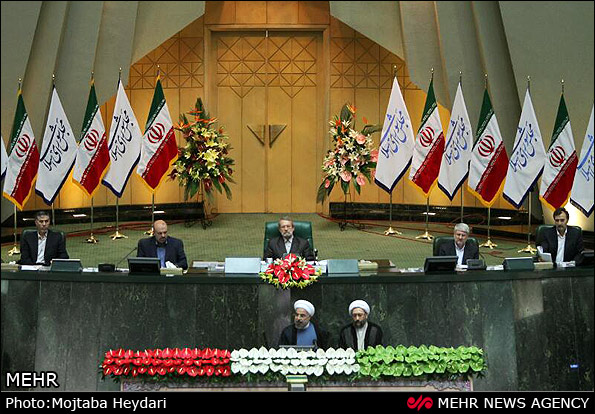 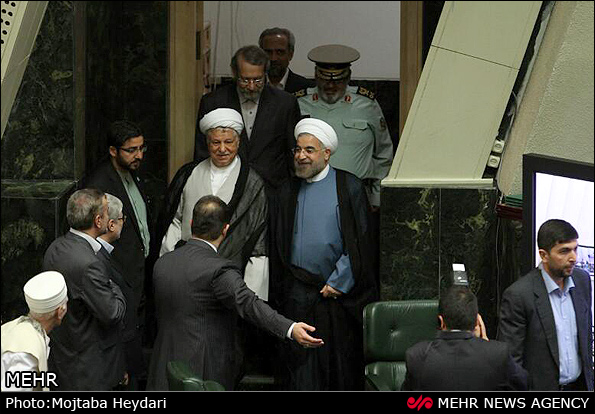 Iran’s President Hassan Rouhani was sworn-in today at Iranian parliament, Majlis, to a four-year term as the country’s president. The top photo shows the swearing ceremony at Majlis. The bottom shows the new president’s arrival at Majlis, with the country’s elder statesman Ayatollah Rafsanjani at his side. Rafsanjani is expected to play a critical role, albeit unofficial, in shaping the policies and strategies of the new government. Behind them is the Chairman of the General Staff of the Armed Forces, Maj. Gen. Hassan Firoozabadi and Majlis Speaker Ali Larijani.

Nader Jaan,
You must have seen the list Mr. Rouhani's proposed cabinet (see below in Farsi). There are some familiar names from both the Rafssanjani and Khatami's Administrations. G.A. in MD

It was a very dignified ceremony and a proud achievement for Iranian people and democracy. However, one should not read too much into a major shift in Iran's foreign policy as it is a continuation of national interests since centuries. One of the first statements Dr. Rohani made was Iran's continued support for its allies, particularly Syria.

Beirut: Iran's new president expressed his country's strong support to Syria's leader Bashar Assad's regime Sunday, saying no force in the world will be able to shake their decades-old alliance.

Hasan Rouhani's comments came as Syrian troops and their Hezbollah allies continued some of their fiercest offensives in the mountains of the coastal province of Latakia, an Assad stronghold against the Salafi terrorists.

Mr Rouhani made the comments during a meeting in the Iranian capital of Tehran on Sunday with Syrian Prime Minister Wael al-Halqi, Syria's state news agency SANA said.

Syria, ruled by fellow Alevi Shias has been Tehran's strongest ally in the Arab world since Iran's 1979 Islamic Revolution and was the only Arab country to stand by Iran during its eight year war with Saddam.

Iran has been one of Dr Assad's strongest backers since Syria's crisis began. Tehran is believed to have supplied Dr Assad's government with billions of dollars since the country's crisis began in March 2011. Iran-supported Hezbollah and Iraq have also sent elite fighters into Syria to bolster an offensive by Assad forces.

"The Islamic Republic of Iran aims to strengthen its relations with Syria and will stand by it in facing all challenges," SANA quoted Mr Rouhani as saying in a report from Tehran. "The deep, strategic and historic relations between the people of Syria and Iran ... will not be shaken by any force in the world."

Mr Rouhani was elected in June and was endorsed by the country's supreme leader on Saturday, allowing him to begin acting as president. He was sworn in Sunday.

Mr Rouhani condemned foreign intervention in Syria, saying that the Arab country is passing through a "failed attempt" to strike at the "axis of resistance and rejection to Zionist-American plans in the region," SANA quoted him as saying.

Damascus and Tehran reject the idea that there is an uprising in Syria and say the country is being subjected to an Israeli-American conspiracy because of its support to militant groups such as Lebanon's Hezbollah.

SANA quoted Mr Rouhani as saying that Syria will come out of this war "victorious."

Mr Al-Halqi said the Syrian people will "not forget friends who stood by their side during times of difficulties," SANA reported.

Later Sunday, Dr Assad took part in an iftar, the meal that breaks the dawn-to-dusk fast during the Muslim holy month of Ramadan. The iftar was attended by government officials, religious leaders and members of the country's unions and political parties, SANA said. It added that Dr Assad gave a speech.

"The president spoke about the latest developments of the Syrian crisis and heroic acts and victories of the Syrian army in defending the country," SANA said, publishing a picture of Assad giving a speech in front of dozens of people. It was Dr Assad's second public appearance this week after he visited troops in the Damascus suburb of Daraya on Thursday to mark Army Day.

Here is a complete cabinet list for Majlis approval.

Following is the list of candidates for ministerial posts:

First vice president: Es'haq Jahangiri - Jahangiri served as minister of industries and mines under former reformist president Mohammad Khatami. He was also a member of parliament for two terms.

Intelligence minister: Ayatollah Mahmoud Alavi - Alavi is a former MP and is currently a member of the Assembly of Experts.

Defense minister: Hossein Dehqan - Dehqan is currently the chairman of the political, defense, and security committee of the Expediency Council.

Minister of industry, mine, and trade: Mohammad Reza Nematzadeh - Nematzadeh is a former industries minister.

Information and communications technology minister: Mahmoud Va'ezi - Va'ezi is a diplomat and engineer. He was adviser to Hassan Rohani in the presidential campaign.

Science, research, and technology minister: Jafar Mili-Monfared - Mili-Monfared is a professor of Amirkabir University of Technology (Tehran Polytechnic). He was deputy science minister from 2003-2005.

Economic affairs and finance minister: Ali Tayyebnia - Tayyebnia is an economics professor who specializes in monetary policies and economic planning. He was also the secretary of the government's economic commission.

Cooperatives, labor, and social welfare minister: Ali Rabee'i - Ali Rabee'i is a social expert who served at the Supreme National Security Council. He was also social advisor to president Khatami.

The sports and youth minister: Massoud Soltanifar - He was the governor of Markazi, Gilan and Zanjanan provinces during the reigns of Rafsanjani and Khatami.