Iran to Use Sayyad Missiles in S-200 Air Defense System 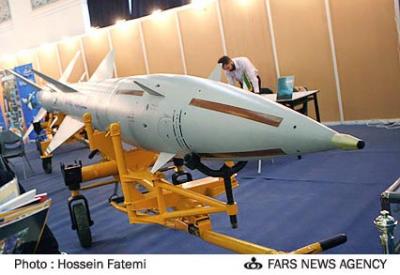 The Sayyad-2 static surface-to-air missiles reportedly have a maximum range of between 200 and 350 km, using radio illumination mid-course correction to fly towards the target with a terminal semi-active radar homing phase. The missile is based on Russian S-75 (NATO SA-2 Guideline) and is influenced by the Chinese HQ-2 and the HAWK and Standard missiles currently in the country’s air defense force inventory. It was first tested in April 2011.

Gen. Esmayeeli also said that his command will soon test Bavar (“Belief”) 373 system – which he described as an Iranian version of Russian S-300 long-range air defense system. Russia has refused to deliver the S-300 to Iran despite having signed a sales contract with the country.

Hey Nader agah, I am wondering why you are not covering the news surrounding syria and that there most likely will not be a u.s. led strike against assad as obama is seeking congressional approval now and with u.k pulling out of any response altogether.

I think its a way more interesting topic.

The first units of Bavar 373 are undergoing testing near Shiraz and are a combination of Chinese HQ-15 and is the upgrade version of S-300PMU-1. Pakistan has the Chinese HQ-15 as well, this is better than the S-300V that Russia developed for Iran and later upgraded to the better S-300VM version. Those units are now in Syria.

An S-300VM battery is capable of taking down both aerial targets moving as fast as 4,500kph, tracking and engaging up to 24 aircraft or up to 16 ballistic missiles simultaneously. It has a range of up to 200km for aircraft and up to 40km for ballistic missiles. It takes no more than 6 minutes for a trained crew to deploy the system from travel position to combat position. Hopefully, the Syrians are linked to the Russian EW systems.

Russia sold two S-300VM batteries to Venezuela in April this year, which was the first deal fort the hardware. Iranians have had ample time to examine and improve the S300 VM guidance and ECM. India is among possible buyers of the system.

Syrians currently have an integrated S-300 surface-to-air missile systems in addition to S-200, Buk-M1-2, Buk-M2E, Pantsir-S1E, S-125 Neva and S-125M Pechyora systems, which would allow Damascus to successfully respond to U.S. air and sea missile attacks, Russians naval pickets off Cyprus can also provide real time ELINT on any incoming strike and have coordinated response configuration as all the Syrian systems are Russian

Syria's air defense systems if properly manned, dispersed and based on real time data should be able to appropriately respond to strikes by the U.S. and its anti-Syrian poodles like the French, should a war begin. Today Damascus has approximately 1,000 air defense missile systems and more than 5,000 different air defense weapons including AAA and lethal radar guided ZSU-23/4 Quad "Shikla" that can spew enough lead to bring down a Tomahawk. Iranian monitoring ELINT stations in Lebanon and Golan will also play a crucial role in detection and interception. Syrian ground units also have plenty of manpads that can take on low level threats.

Many of the usual claims of "homemade" from modified existing stock, however what we can be more sure of is the IRIADF Brig. Gen. announcement of late September for the upcoming "Defenders of the Velayat Skies 5".

Iran is backing a winning horse and as the Independent Newspaper puts it Iranians have PhD in asymmetrical warfare:

One important aspect of the Syrian conflict as it affects the US and Britain is lethally similar to the Iraq war. In each case any outsider intervening becomes involved in several inter-related but separate conflicts. In Iraq in 2003 the Iranians were glad to see the fall of their old enemy Saddam Hussein but fearful that an Iraq occupied by the US and Britain would provide a platform to overthrow the Tehran government. They did everything to make sure the Americans and British never stabilised their occupation of Iraq. "The Iranians have a PhD in this type of covert warfare," remarks an Iraqi specialising in national security.

This year alone Israel carried out 3 successful aerial attacks in Syria without even being noticed. What chance do they have of offering a credible response against the mighty USA?

In the past there were reports that Russians anticipated, in addition to other defenses, to use their Mig 31s to knock down incoming cruise missiles. Those Migs supposed to fly above the paths of cruise missiles and simply track them and "knock them down" later.

Of course it might be possible on Russian territories, where ranges of the F22 and F35's missiles wouldn't be able to interfere with those Migs...

In the past, Syria apparently returned her Mig 31s back to the Russia...in exchange for other equipment.

How about those welded barrels on trucks claiming to be S-300? LOL!!

In 1983 during the Lebanese civil war to support their losing Phalangist stooges,US bombed Syria in frustration and a number of planes were shot down. Syrian surface-to-air missiles shot down two American planes, an A-6 Intruder and an A-7 Corsair. The pilot of the A-6, Lieutenant Mark Lange (flying from USS John F. Kennedy), was killed; his Bombardier/Navigator, Lieutenant Bobby Goodman, ejected and was captured by Syrian soldiers. Lt. Goodman was held for 30 days before his released was facilitated by Jesse Jackson. Lt. Lange's body was returned. From the A-7, the pilot ejected and was rescued, although he suffered severe injuries.

US air force is quite incompetent as Vietnam, Iraq and Afghanistan have amply shown and the Zionists exaggerate their claims or Hollywood myths. Time will tell how the US fares this time.

the Iranian regime usually does a fair chance to offer credible responses to the USA, but choose to respond in other manners.

If you think those are oil drums you must be a moron
http://www.uskowioniran.com/2010/04/iran-s-300-type-launcher-and-radar.html
http://nukesofhazardblog.com/images/user/102/s300graph.jpg

readerSeptember 1, 2013 at 2:25 AM
You are mistaken,the israelis did not enter syrian airspace they used stand off weapons at long range against fixed targets from well outside syrian airspace,you saw what happened to the turks when they got to close.Assads biggest problem is his lack of deterrence credibility,his failure to respond to those attacks made him look weak,there is little point in having the second largest missile arsenal in the region if you are too afraid to use it