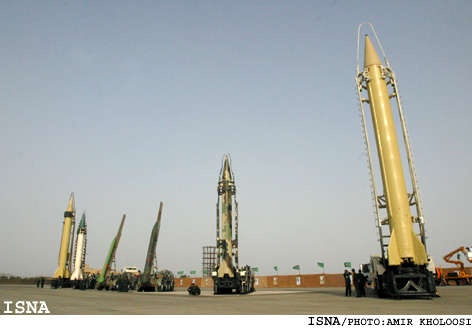 
Iran's former defense minister says his country is ranked sixth in the world in missile production.

Vahidi also claimed that Iran is first in the Middle East in missiles production.

Like yesterday's announcement by Iran's outgoing nuclear chief claiming Iran currently has 18,000 operational centrifuges, so too outgoing Defense Minister Vahidi is both taking the opportunity to posture support before upcoming negotiations with the West, as well as setting the bar of achievement before the newly installed Rouhani administration.

As a side note, there's a notable difference between the former and new defense minsters. Outgoing Defense Minister Vahidi retained his current standing in the IRGC as a brigadier general, while the new. recently confirmed Defense Minister Dehghan has for some time now shed his IRGC uniform and enters the ministry wearing civvies.
Posted by Mark Pyruz at 2:27 PM

Being ranked sixth in missile production doesn't mean squat when up against nuclear armed countries like the US.But of course Iran is enriching uranium for peaceful purposes,right?

I believe it has to do with deterrence and it is not a competition against the US or any other power. Global Geo-strategic considerations in a multi-polar world are not a childish and simplistic zero sum game. Iran is a medium sized power with substantial military assets in terms of deterrence and ability to fend for itself, hence 35 years of impotent US/Zionist barking.

the claim that Iran's nuclear program is entirely for civilian purposes is untrue and unbelievable and is not really even expected to be believed by the Iranian liars offering it.

An Iranian newspaper has reported that a new addition to the country’s school curriculum will include classes on the “hunting and downing of alien drones”.

The Fars News Agency (FNA) reported remarks made by General Ali Fazli, a commander during the Iran-Iraq war and now deputy commander of Iran’s Basij Forces – a paramilitary group of young volunteers.

“This year, we will witness changes in the contents, teachers and teaching hours of the defensive preparedness lesson," Fazli is quoted as saying, “and hunting of spy drones is an example of this change of content.”

The most high-profile incident involving drones in Iran to date was the downing of Lockheed Martin RQ-170 Sentinel UAV in December 2011. Whilst the embarrassed US unconvincingly claimed that the aircraft "malfunctioned and crashed", Iran credibly stated that it was hacked by the country’s cyberwarfare unit and put the aircraft on display adding insult to injury.

Iran has a history of bringing down US drones and is known to have captured more foreign drones including a Boeing ScanEagle drone – a smaller model capable of being carried by an individual – and have begun producing their own replica devices.

The FNA, a pro-reform daily paper, did not offer details of the lesson-plans, but noted that drone-hunting would only be one part of a larger “defensive preparedness curriculum” to be taught for two hours and three hours each week in junior and senior schools respectively.

Ballistic missiles are unreliable, ineffective due to very poor accuracy and therefor of no serious consequence to an adversarie's military forces...unless they carry a nuclear payload. Ballistic missiles are really only good when fired towards a town or city because despite its poor accuracy it will cause damage of some sort by hitting a random spot, e.g. a civilian housing block and turn it into rubble, that's about it. USA knows this. The only reason a nation would go to such lengths as to develop the capability to manufacture such weaponry is to also eventually be able to obtain nuclear warheads which could be installed on a cheap long-range weapon platform. Since 1990's Iran has been seeking to attain the capability to build a nuclear weapon in conjunction with the development of Ballistic missiles. The 2003 Invasion of Iraq pretty much scared Iran into halting its work in several of those areas, and instead opted to compartmentalize them, make advances in one area at a time, in order to minimize suspicion and better handle the diplomatic part.

Quite right. That was how ballistic missiles were used in the Iran-Iraq War. Neither side had any tactical use of them...nowhere in the litterature pertaining to the Iran-Iraq War can one find a clear example of ballistic missiles being used to destroy enemy troops or hardware on the ground...most likely due to the inherently flawed and weak aiming mechanism, rendering them relatively useless in the way of striking enemy positions. Those weapons merely provided the means to terrorize the population of the opposing nation and rattle them psychologically, so at least in that sense, the missiles did play a strategic part. As you correctly point out, these weapons become significant only when they are armed with a nuclear warhead. As such they are the third best delivery platform ever conceived. The best being a modern, technologically superior, Air Force. That's why they call the Ballistic Missiles Force - "the poor man's air force". And the second best being a submarine force able to fire ballistic missiles (possibly nuclear ones, as well).