The Latest Report by IAEA 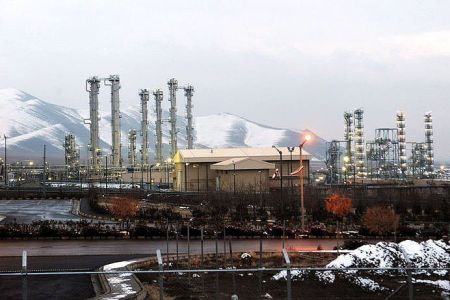 IAEA Director General Yukiya Amano has reported to the agency’s board of governors that Iran has postponed the startup of its plutonium-producing heavy water reactor in Arak to sometime after the first quarter of 2014. The move is seen as the first concrete gesture of good will by the new Rouhani administration regarding the country’s nuclear program.

“In a letter dated 25 August 2013, Iran informed the Agency that ‘based on the practical progress of construction work’ the previously indicated ‘start-up’ date for the IR-40 Reactor was ‘not achievable, so it cannot be the first quarter of 2014.’” (IAEA, 28 August)

In its report, the IAEA has reiterated its complaint that due to lack of cooperation by the Iranians, the agency has not been able to begin “substantive work with Iran on resolving the outstanding issues, including those related to possible military dimensions to Iran’s nuclear program.”

Iran has produced 372.5 kg of 20% U-235, of which 185.8 kg remain in that form, and the rest has been re-processed into fuel for Tehran’s nuclear research reactor. (Blogger note: The move shows Iran has consistently maintained the volume of its 20% enriched uranium below the level needed to be reprocessed into highly enriched uranium enough for one nuclear weapon).

The IAEA report also criticizes Iran for not moving forward with implementing “additional protocol” as called by IAEA board of governors and the UN Security Council.

“Contrary to the relevant resolutions of the Board of Governors and the Security Council, Iran is not implementing its Additional Protocol. The Agency will not be in a position to provide credible assurance about the absence of undeclared nuclear material and activities in Iran unless and until Iran provides the necessary cooperation with the Agency, including by implementing its Additional Protocol.”

"This IAEA report makes clear that Iran continues to rapidly expand its nuclear weapons program and underscores the urgency of Congress passing new Iran sanctions legislation into law," Eliot Engel, the top Democrat on the House Foreign Affairs Committee, said in a statement.

Have I missed something here? Has a new NIE superseded the last two that previously stated Iran has an no active "nuclear weapons program"?

Iranians think people are stupid. I'm waiting for the rial to plummet again once the new sanctions cine into place. Was losing 80% of your purchasing power worth it? Idiots

Actually this blog article is erroneous. Iran has only postponed the "heavy water" approach because it is old technology (pre WW2) and Iran is making fast progress with mass enrichment using newer centrifuges. It is just wishful and naive thinking that Iran will ever give up nuclear technology or program.

United Nations nuclear inspectors who visited Iranian nuclear facilities in the summer observed the installation of hundreds of new centrifuges in two different facilities the country uses to make enriched uranium. The officials also found that Iran’s available stockpile of low-enriched fuel has grown an additional 6 percent since May to more than 15,000 pounds, enough in theory for about nine nuclear bombs if the material is enriched to weapons-grade.

Ahmadinejad administration announced two months ago that the Arak reactor will be completed by the first quarter of 2014. Are you saying that after all these expenses and years of work, the new government has suddenly realized that the reactor design is too old and they need to change the design now that the reactor is all but ready to go online? I think not! The decision to postpone commissioning Arak was political.

Maybe, but there are budgetary constraints and centrifuge enrichment is much faster and economical. Iran has increased that substantially.

Another quite glaring fact is that from the current unraveling state of US foreign policy and its complete impotence even against a small state like Syria and isolation in the world, it is imperative that Iran develop a nuclear deterrent to keep desperate US hyenas and its poodles at way as the US gets desperate in its suicidal quest for global hegemony.

No matter the outcome of the idiotic US attack on Syria, which is bound to have tragic consequences, Iran should take a momentous national security decision to safeguard itself against such aggression. The only way it can do that will be by having the deterrent power that North Korea possesses, which keeps US/Zionist predators away.

World opinion will understand as it now extremely hostile to the US. The European street is seething at US warmongering and NSA/CIA snooping and democratic subversion. Now even the meek also have a moral right to defend themselves, as Syria is demonstrating, unfortunately with a nuclear deterrent like Fortress North Korea and the wisdom of Kim il Sung. Obama's presidential moronic and inept legacy will be a nuclear Iran and complete global power shift. The Zionist dogs tail can only wag so much.

The decision to postpone Arak startup is mainly due to problems in producing enough heavy water. The destillation process is not very effective which is why Iran is trying to buy heavy water abroad.

Anyway after obtaining enough plutonium Iran will face other enormous problems like building and managing a plutonium separation plant and machining plutonium to a pit while maintaining the δ phase in the Pu-Ga-alloy. All in all another ten years time and waste of money.

sigillumseptimum.comAugust 30, 2013 at 3:39 AM
I guess it depends on whether they get any help,the dprk certainly has experience with building and operating plutonium separation plants and producing pits.tho if iran wanted a bomb that badly it could`ve already produced a small arsenal using its uranium based centrifuge enrichment technology,not as efficient as plutonium based weapons but still just as capable.I think the lesson here is not to underestimate iran