Netanyahu: ‘Pressure’ Is Only Way to Stop Iran 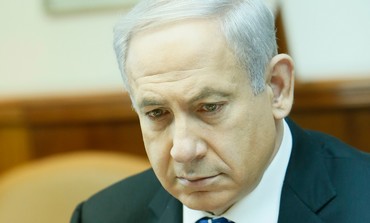 Speaking with a group of visiting U.S. Congressmen, Israeli Minister Binyamin Netanyahu warns if pressure on Iranian nuclear program is decreased, the Iranians will go all the way, crossing the nuclear threshold.

“I have said that before, and I'll say it again, because that's important to understand. You relent on the pressure; they will go all the way. You should sustain the pressure,” Netanyahu said. (Jerusalem Post, 6 August)

Not worth responding to. Usual desperate Zionist Nothing Yahoo barking with no teeth.LOL.

So this Zionist, who has respect of some authors, doesn't believe in the new Iranian president Rouhani.

Therefore I think that it would be more useful to publish more important news related to Iran than like those published in the above article...

Recently two more important facts have taken place and this web side apparently ignores or doesn't know about them timely..

First info is related to the new Supreme's Leader's decree, which nominates former president Ahmadinejad as a new member of the State Expediency Council.
That move solidifies unity of the Islamic Republic and denies attempts of enemies to divide the Iranian society...as well as is a form of gratitude for Mr. Ahmadinejad's service to the country.

The second information, which may be also more valuable, is that the former president Medvedev, who was once heralded as an opponent of Putin (and is a Jew), has given a very interesting interview, for the Russia Today, which is titled "West acts like 'Bull in China Shop' in the Middle East".

Mr. Medvedev summarizes his interview, that "Nothing good came out of (the West's actions) it".
This information is related to Iran , because some western "experts" state that Iran -Russia relation will improve if the Russia relations with the West will "worsen".

I thought you also did not believe in Rouhani. Are you then saying that you share that view with Netanyahu? Interesting!

What does Ahmadinejad’s appointment and Medvedev’s comments have anything to do with the subject of this post? Are you OK?

I have tried to post my comments earlier about Rouhani's election, commenting that it was a worst nightmare for the enemies of the Islamic Republic, because they had wished an election of anybody else but Ayatollah Rouhani...

Medvedev's comments precisely characterize conditions of the US diplomacy at present times and are more important than Netanyahu's ones, unless someone assumes that the US is a servant of the Zionist entity.

And that was my suggestion that that kind of information may be more interesting for your "students", since they bring info that Russia is waking up from a western hypnosis...
I have posted my suggestions in that place, because I don't know where to post other kind of suggestions.

Nutsyahoo, looks really funny in that pic! is he about to cry?

Nutty nutanyahoo would know all about "going all the way" with a nuclear programme. Especially the zionist entity's own, covert nuclear weapons programme.

A new opinion poll indicates that a great majority of Palestinians do not have confidence in the role played by the US in the Israel-Palestine talks.

The survey, which was conducted by Gallup between May 21 and June 4, was based on face-to-face interviews with 1000 Palestinian and Israeli adults. Its results were released on July 26.

The findings revealed that 74 percent of the participants disagreed with the acceptability of the solutions proposed by US president Barack Obama and US Secretary of State John Kerry. Only 12 percent of the respondents considered it as acceptable.

When the participants were asked about their trust in Obama to help the process of Israel-Palestine talks, 66 percent expressed no confidence in him.

Several Palestinian factions, including Hamas resistance movement and the Popular Front for the Liberation of Palestine (PFLP), condemned the resumption of talks.

Well according to some media reports even the US is getting tired of Zionist barking against Iran as it ponders serious negotiations with the new government of Dr, Rohani.

WASHINGTON — The United States is stepping up efforts to dissuade Israel’s government from criticizing the policy of President Barack Obama toward Iran, officials said.

The Obama administration has decided to again send the chairman of the
Joint Chiefs of Staff to Israel. Officials said Gen. Martin Dempsey was
scheduled to leave Washington for Israel and Jordan on Aug. 10 in an attempt
to end Israel’s lobbying of Congress to oppose any U.S. reconciliation with
Iran.

If nutty nutanyahoo said so, it must be true! He even has a cartoon bomb to prove it!