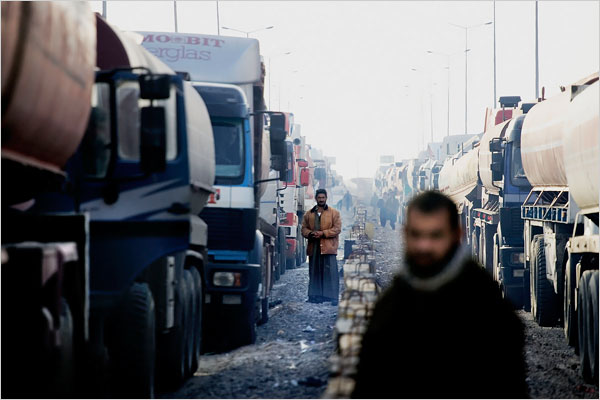 The Ministry of Natural Resources of Kurdistan Regional Government (KRG) denied reports that the Kurdish government is exporting crude oil to Asia via Iranian ports. Yesterday, Reuters reported that Iraqi Kurdistan has opened oil trade route via Iran; exporting crude by truck to the Iranian ports of Bandar Abbas and Bandar Imam Khomeini for shipping to Asia.

“The quantities that are exported by truck to Iran every day are not crude oil, but black oil—a remnant of the filtering process that takes place at the Baiji refinery (on Baghdad-Mosul road). Civil companies in the private sector purchase this oil from the refinery and sell it to Asia and Pakistan via Iranian ports. This process—which has taken place for years, with the knowledge of the federal government—has nothing to do with us,” said a spokesman for KRG’s ministry of natural resources. (Asharq Al-Awsat, 9 August)

But the same spokesman also told Asharq Al-Awsat that some crude oil from Kurdistan is being trucked to Bandar Imam Khomeini.

“Over the last two months, crude was transported by truck from Kurdish oilfields at the northern border to the Imam Khomeini Port.”

Another official at the Kurdish oil industry told the newspaper that the amount of crude oil exported through Iran could be as much as 30,000 barrels per day (bpd).

The second official told the newspaper that Erbil’s government “is careful not to annoy its two neighboring regional powers—Turkey and Iran—over the issue of exporting oil… It is a political compromise,” the source said. “They cannot ignore the Iranians, nor can they restrict themselves to working with the Turks. There needs to be a balance.”

“We are not aware of any such operations. We sell oil on the market, and once it is sold, it becomes the responsibility of the buyer,” said Bjørn Dale, acting director of the oil and gas exploration company DNO, which operates the Kurdistan Region’s Tauki oilfield. (Asharq Al-Awsat, 9 August)

This is an important development as both Iraqi and Syrian Kurds are increasingly dependent on Iran and look at it as their protector . Iranian Kurds are the best integrated in the Iranian national fabric and are champions of Iranian Kurdish policy. The Sepah and Artesh have a high number of Kurdish origin senior officers. Iranian Kurds and Khuzestani Arabs showed their complete loyalty to Iran during the Jange Tahmili when they fought fiercely to defend Iranian soil. Iran has upheld their trust by complete inclusion at the highest levels of government and society.

So we're told that Iranian crude exports are down but somehow Iraqi-Kurd exports are successfully using Iranian ports?

I'd be interested in hearing more about the logistics involved in this process.

And I'd also be interested in hearing about the reverse process, involving clandestine Iran through Iraq (Baghdad govt.) exporting of crude.

Let the numbers ,figures and statistics fool the bully imperial powers!-I THINK if the US wish to strangle IRAN economically, then it needs to uproot the Nation ,plant it in the middle of the INDIAN ocean then surround it by warships!!.