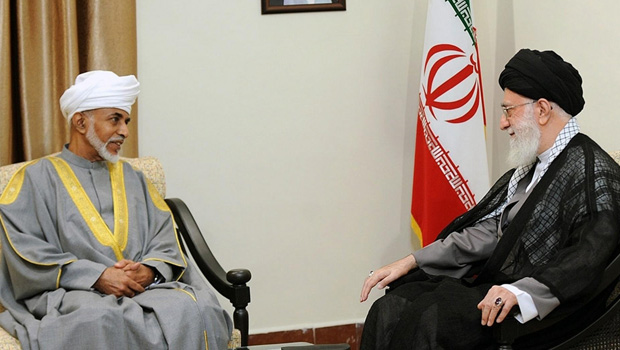 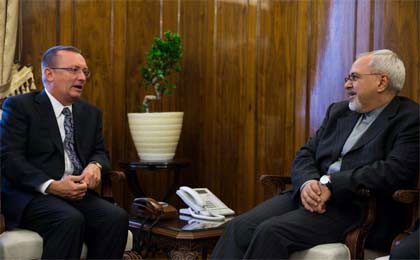 Oman’s Sultan Qaboos arrived in Tehran today and met with senior Iranian leaders. Arab media reported that an objective of Sultan's visit to Tehran is to mediate between Iran and the United States.

It is paradoxical that a king/sultan/dictator of a tiny kingdom is honoured as a legitimate leader/dictator first in a pompous ceremony in Asadabad (built by a former king/dictator!) and then by the supreme leader of a country which reject dictatorship - except of course that bestowed by god to a Faqih through a system know as Valiet-e-faqih!
Who said IRI and US have nothing in common? The fact that they both have faith and trust in a dictator to deliver, proves that wrong.

That green flower - plant, on the photo with Feltdman, is a crooked one and apparently has been chosen as a decoration to describe an "importance" of that meeting.

Feldman is a Zionist shill who ran the Iran desk at the State Department and was advocating the Zionist line of "attacking Iran" and now since the UN is a Zionist front has become an hack there. Iran did not buy his lies and manipulation. Qaboos trip was mostly economic and for his own survival as the Arab nightmare may visit Oman soon.

attacking Iran isn't something held only by Zionists.

it's an idea that's pretty popular throughout the Western world and much of the Middle East and something that's based upon opposition to Iran's weapons program and other things that Iran does.

an actual attack upon Iran may even happen should the theocracy attempt to assemble nukes.

the Saudis aren't Zionists and they would be quite pleased to see Khamenei in a cage and the Iranian military and paramilitary forces squashed, scattered and hiding in the mountains.

It is an idea pushed hard, by zionists. It may be popular with western leaders manipulated by zionist lobbies but, certainly not with a lot of ordinary, western people. They have had enough of endless wars and many do not want their countries dragged into new ones.

The accusation against Syria is an attempt to gain "the momentum" by (poor minded) Obama and to divert attention from the military and Zionist coup in Egypt, as well as from murders commited with the " practical silence" of the Empire...

They are also preparing to create a "liberated zone", next to Damascus and "a protecting" no fly zone for their mercenaries trained in Jordan.