Khamenei Against U.S. Mediation in Mideast 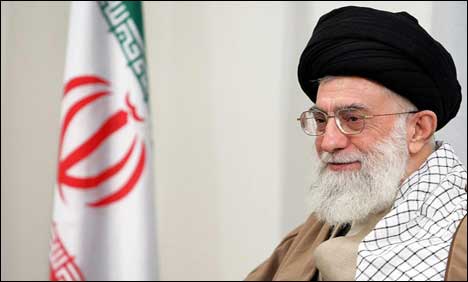 Iran’s Supreme Leader Ayatollah Ali Khamenei said today that the United States is not a good mediator in Mideast peace talks because of its ties with Israel. Khamenei made the comments ahead of the second round of U.S.-brokered Israeli-Palestinian peace talks next week. The talks resumed after a five-year freeze.

The Islamic Republic has traditionally been against the principle of the two-state solution, the eventual goal of the Palestinian-Israeli talks. Ideologically, it prefers a single Palestinian state encompassing Muslims and the Jews. Pragmatically, it has said it would accept whatever solution the Palestinians agree with.

“The U.S. is not a real mediator, it stands by the Zionists,” said Khamenei. “Definitely, it is against the interests of the Palestinians.” (IRNA/AP, 9 August)

Khamenei added that the current U.S.-sponsored talks will damage the Palestinians and force them to “abandon their rights and encourage the occupier.” He did not offer any alternative to the current peace talks.

Can someone tell this old fool that the US is not going to compromise Israel for some low life mullahs in Tehran.Meanwhile Iranians are paying the price for these scoundrels.

Supreme Leader Ayatollah Ali Khamenei, supreme leader of the Arab Palestinian people...Now, if only he would go live with "his" people. :D

Actually, what the Iranians have stated for years now is that they'll abide by whatever the Palestinians as a whole agree to.

Back when C. Rice held highly publicized talks concerning the issue of Palestine, the Iranians said exactly the same thing for the same reasons. The Iranians expect the same result this time around, too, which is more accurately what Khamenei is expressing again for the upteenth time.

Rouhani said the Iranian people and their government will "spare no effort" in supporting the nation.

Western governments have tightened the sanctions pressure on Iran as punishment for a controversial nuclear program. The United States and its allies suspect Iran is trying to develop a nuclear weapon, an allegation the Iranian government denies.

Rouhani, a former nuclear negotiator, said his adversaries have so far been unable to cripple Iran's general ambitions.

"Since the early stages of the Islamic Revolution, the enemies have failed to bring the Iranian nation to its knees," he was quoted by the semiofficial Fars News Agency as saying.

Right...So Iran should keep sending it's precious money to the Palestinians, who all the while smile and send fighters to back the rebels against Asad(and perhaps kill some IRGC in the process)?

Mark, are you for real? Is Iran such a rich paradise that it can and needs to waste itself interfering in the Arab World? Do you care more about the Arabs than your own people? I seem to remember a war not too long ago, where those same Arabs, virtually the entire Arab league, helped to kill nearly 1,000,000 Iranians.

I guess their lives don't matter to you...Only the Palestinians, who actually sent people to fight along side Saddam in that war.

Funny. I don't see guys like you crying for your ethnic cousins next door in places like Afghanistan or Kurdistan...And lets not forget about Persian racism in Ahwaz.

unless you give us some reasons why you think your US 'can't compromise Israel for some low life mullahs in Tehran'- YOU LOOK like that same fool who have chosen to take a low profile all along!.

BEHIND every move diplomatically by the establishment,is sound LOGIC!

So American taxpayers should keep sending their precious money to the zionists?

As an American, I would cute all foreign aid, including Israel. That is called common sense.

Anon 12:57...Two wrongs don't make a right.The Palestinian issue has nothing to do with Iranian people.

Anon 6:13 PM, true. In that case, the zionist regime has nothing to do with American people and is therefore not deserving of American peoples taxes.

B.M.A...There are no reasons to be given to the likes of you.You people understand one thing only. And that is to be hammered !!

Anon 7:03 AM...Iranian people are suffering because of the policies of the regime.Are the Americans suffering because of US support of Israel? Nearly half of New York is of Jewish origin.Are there Palestinians of Iranian origin in Israel? No of course not. But I can tell you that there are Iranians of Jewish origin in Israel.But unfortunately I know what your answer will be.

Do you know the meaning of "LOGIC"?

Iranian people are suffering much much more than the Americans because of the regimes self inflicted and destructive policies.Every day Iranians are being "shot in their heads"in the streets,raped,tortured and murdered by the occupying Islamist forces of the regime.Does anybody give a hoot about them? Or are you just concerned about the Palestinians?

So according to zionist logic, because other people do bad things, that makes it okay for zionists to do the same. They murdered and wounded Americans on board the USS Liberty and still, they live off American taxpayers money. Bunch of ingrates, biting the American hands that feed them billions of US dollars every year.

Who cares about your "zionist logic".Lets discuss the situation in Iran where the occupying regime is raping,torturing and killing Iranians every day for the want of freedom and the preservation of their true Iranian culture.

It's the logic of zionists, not of anyone who speaks out about their parasitical lives on American taxpayers money. Iranians and other people can send support to the occupied, oppressed and terrorised Palestinian people, as long as the USA does the same for the occupiers and their system of apartheid.

You go and tell those things at Iranians in Iran and they will laugh at your face.Under the occupying regime Iranians come thired place after Palestinians.Iranian people should come first and only first.Who ever says otherwise is a foreigner or a traitor to the Iranian people.