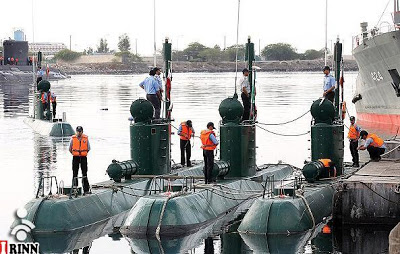 The first Fateh-class submarine will be publicly shown in the near future, and will become operational by the end of this year, according to IRIN. The new sub is believed to have displacement of about 500 tons, limiting its firepower. No details of the design or its armament have been released.
IRIN Commander Rear Admiral Habibollah Sayyari had said that aside from Fateh-class submarines, Kaman-class missile-launcher warships and Jamaran 2 destroyer will become operational in the current Iranian calendar year (ending 20 March 2014).

Does someone has more infos for the CNAS guys about new Iranian torpedoes or misilles.

Why would you want to fire a torpedo and a missile simultaniously? Wouldn't it cause way too much stress on the structural integrity of a sub? And we are talking midget sub here

Not really. Missiles are strategic long range weapons and they are launched from the silo's using compressed air while submerged, with motor ignition occurring as soon as the missile clears the surface of the water. Torpedoes are passive tube launched and cause no "vibrations" and work on hydraulic systems and buoyancy. Any modern submarine is capable of firing both simultaneously or selectively. Solid fuel missiles are very compact and safe to fire.

AnonymousAugust 23, 2013 at 9:55 PM
It would greatly complicate the task of the defence to have both an antiship missile and a homing torpedo fired at the target at the same time.Both are likely fired from the torpedo tubes,the ability to fire antiship and land attack cruise missiles has greatly increased these subs lethality,do not underestimate their capabilities just because of their size,in a water way like the gulf and the straits of hormuz these are very nasty little weapons indeed

In the west Torpedoes and Missiles are ejected from a sub using a slug of water forced in to the tube (and thus pushing the weapon out). There isn't any real stress on the submarine's hull by doing that, and the launch tubes are designed to handle the pressure of a launch.

The only real danger is in firing too deep or at very high speeds (speeds over 25 knots) where the torpedo might be damaged by the launch, the dangers of high speed launch are mostly in American and other submarines that use amidship torpedo tubes because the shear of the torpedo being ejected at a 8 degree angle; submarines based on pre-Project Nobska designs or Russian design ethics have their torpedo tubes on the center line axis because they are intended to fight at high speeds so don't want to risk damage to the torpedo on launch at speed.

I don't know if the Iranians use a water slug or the older compressed air method of launch but both don't put stress on the sub (I doubt they are using the swimout method if they are launching missiles).

Regarding the new Fateh submarine, it is a significant achievement to increase submarine displacement from the 120t to around 500t.

That kind of displacement will be a close to an optimal one for the Persian Gulf activities...