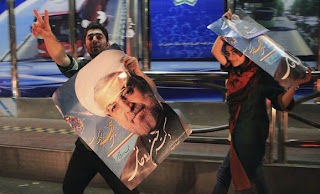 Veteran journalist Barbara Slavin of Al-Monitor participated in the inauguration ceremonies of Iran’s new president. She has filed a first-hand report on independent journalists who were allowed to participate in a presidential press conference, Rouhani’s first, for the first time after eight years of the hardline administration of Ahmadinejad. Slavin, an Iran expert, started her career with the New York Times during the hostage crisis. Slavin is also a senior fellow at Atlantic Council.

There was a time way back when she was able to put forth objective journalism but that time passed several years ago. Nowadays, she's heavily partisan to the point where she puts out unreliable journalism.

"Reformists" have no shame.They are no different to Sandist Khors or Mozdors of the regime.A lot of "reformists" were former regime officials and consist of the types of people that have the preservation of the regime at mind.They are so stupid that they even wrote on a placard "Neda we have got your vote back"! But those idiots forgot to mention,did they manage to get the hundreds of lives lost back after the 2009 selections?

hilarious, fanboy, just hilarious coming from a chucklehead who links to the lame Leveretts like a lapdog. yet Slavin a seasoned journalist is someone you try to smear as unreliable.

you're a joke that you don't get.

You're not having any success against Mr Pyruz, poor you...