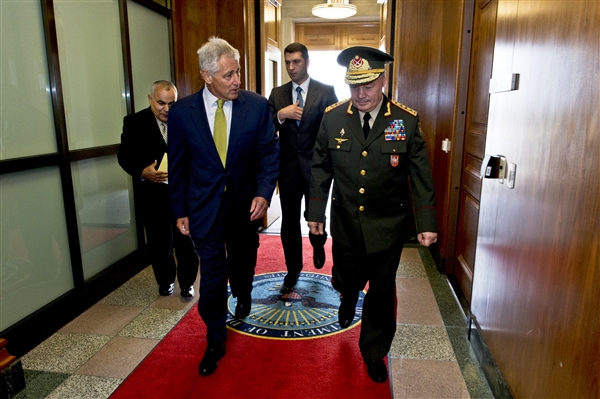 U.S. Secretary of Defense Chuck Hagel said on Monday that it is imperative that Iran quickly resolves concerns about its nuclear program. Hagel made the comments after meeting with Azerbaijan’s Defense Minister Safar Abiyev at the Pentagon.

The White House said on Sunday that Iran will find the United States a “willing partner” if Rouhani is prepared for serious talks on its nuclear program. Rouhani answered the call by saying in his first news conference today in Tehran that Iran was ready for swift and substantial talks on the country’s nuclear program.

The White House said on Sunday that Iran will find the United States a “willing partner” if Rouhani is prepared for serious talks on its nuclear program.

1) Iran surrender its right to the nuclear fuel cycle.

3) Iran capitulate on the Palestinian and Syrian issues.

If that's true, then why do you believe Rouhani is willing to start negotiations with the U.S.? Is he a novice or a traitor? Or it might be that you are wrong in your assumptions?

Sorry to burst the exuberance bubble, but any "talks" with Iran have less chance than Hillary growing a pair of cahones. The US issues with Iran have nothing to do with the nuclear program. Some of us who live in reality also know that the US turned against the shah when he got too big for his boots and started ordering hundreds of F-16s and other weaponry, initiated the nuclear program and started lecturing the west about their decadence and unprincipled stand.

I still have a Newsweek cover dating back to 1977 when the shah predicted Iran to be the 6th biggest industrial power and launched a scathing attack on the west. 2 years later he was on a jet plane to Panama and homeless. So, all this bruhaha with Iran has to do with maintaining the Zionist hegemony in the region. Iran is a large, ancient and most importantly, a non-Arab nation with immense wealth and human resources talent and is the only one that can really dominate the region with economic and military power, so the Zionists will try to undermine any challenge to their delusional goals, whether it is the shah, Ahmadinejad, Rohani or even Moses himself. I simply don't see any real and meaningful talks on the horizon despite Iran and Dr.Rahani's sincere willingness. I this case, I hope I am proven wrong.

serious talks means throwing Russia out of Iran (in case of misunderstanding) ...

Here you have Serious Talk

It might be to counter the hasbara propaganda from the USA and its zionist masters and show that Iran is willing to resolve the issue. This is possible if the USA accepts Iran's inalienable right to develop nuclear power with everything that it involves and Iran therefore remains a member of the NPT.

It's quite clear that it's all not about IRAN's confirmed peaceful nuclear energy program but indeed, the most concerned and feared of all, IRAN's fast growing military power in the whole region of the Middle.