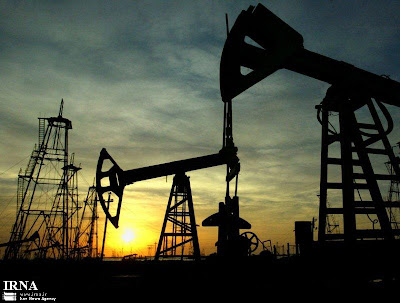 The Deputy Oil Minister Mohsen Khojasteh-Mehr today told reporters in Tehran that the country requires at least 150 billion dollars in new investment in the next five years to maintain its current levels of production. Without such investment, the minister warned, Iran’s oil production may fall to 2.7 million barrels per day (bpd) within the five-year period.

“If the investments are not realized, the country's oil output will drop to 2.7 million bpd," Khojasteh-Mehr added [IRNA, 30 May].

Iran’s current production is 3.7 million bpd, with more than 2 millions bpd exported. If the production levels falls to 2.7 bpd, the exports will have to be cut in half. However, an investment of $150 billion could actually increase the total production by nearly 1 million bpd. The deputy oil minister did not reveal possible sources for any new investment. The international sanctions against new foreign investments in the oil industry in recent years have severely limited the national oil company’s programs.

Germany has just announced the total termination of its use of nuclear power by 2022, at the latest. Nuclear power, according to the BBC, accounts for 25% of German energy needs. Japan has also announced a plan to transition away from nuclear power. Russia sits roughly between Germany and Japan, and is a major energy exporter, but Iran is the only major energy producer to have enormous amounts of untapped reserves, also requiring infastructural investment to gain access to those reserves.

This is a twofold triumph for Iran, something that its present government well recognizes. Iran has the benefits of time, and location on its side, and is well suited to reap the rewards of both.

Iran's nuclear programme has always been to deter aggression, as per Libya, and to ensure the independence of its decision making. And now Iran is poised to become an even greater world energy power, an event that will shake the current geopolitical environment. Think about it, China has untold wealth sitting in US treasuries, Iran is sitting on untold oil and gas reserves needing investment to exploit, and Germany and Japan are both energy hungry and resource poor. A match made in heaven!

Gifted one, you nailed it right on the head. If Iranian leaders play their cards and remains steadfast despite all the threats being thrown at them by the US and her tag-along friends, the future is indeed very promising for Iran.

The unspoken secret in the region is the fact that Saudi Arabia's reached peak oil and will soon be loosing her usefulness to the "empire". NATO's "humanitarian" intervention in Libya is nothing but a ploy to secure future oil fields but I believe they're in for a very rude awakening as the revolutionaries won't give it away so easily. NATO president's already talking about sending troops into rebel held territory - BIG MISTAKE!!

Sometimes I just wonder how all the countries that are being used by the US against Iran will relate with Iran in future when their future energy needs depends on Iran. Japan is now learning the hard way ,in terms of energy source ,after the earthquake demolished their nuclear power plants and I don't think they'll ever listen to the US again after they cut their oil business in Iran drastically under US pressure. Sanctions against Iran's oil and gas sector means Iran can only get enough oil out for domestic use and the rest stay in the ground for future use..Not bad!!

Anon 3:29, as a George Orwell once said, "All political thinking for years past has been vitiated in the same way. People can foresee the future only when it coincides with their own wishes, and the most grossly obvious facts can be ignored when they are unwelcome.”

I am no fan of the rotten Ghaddafi clan, but if he had retained his covert wmd programme you think french apaches would be flying in libyan skies today? No, the french would be buying and investing in Libyan oil, on Ghaddafi's terms. Concede an inch to the West and they'll take alot more than a mile. Iran's political system needs reform, but it must be independent, and indigenous. And the Iranian nation must also retain a credible independent deterrence, depending on the good faith of the West is a fools errand, as the (P)GCC member nations will eventually find out.

Political reform within Iran can easily happen if the problems with the west are sorted.

A country under seige cannot spend resources testing things like socioreform, especially since every inch of Iran is analysed to show a weakening regime, imagine if they reform their social policies, the west will see it as a sign of a weakening regime and would try to hold out for a bit longer.

You really think Iran's leaders care what the people wear? Ahmadinejad said himself on more than a few occasions that the people care more about their economy and standard of living than what the females wear.

The problem is, ahmadinejad has lots of opposition in clerical form and for him to go forwad with his reforms, he needs to have more power, which could be gained by having better terms with the west or a better economy.

Thank you, Gifted one..I believe Iran needs a credible deterrence and that is made possible with the nuclear program - be it peaceful or military. I don't care what the west thinks about Iranian nuclear program.If anything, the west didn't ask permission from Iran to develop their nukes so why should Iran do same?It's grossly hypocritical when they continue to develop new nukes while telling Iran to abandon theirs.The nerve!!!

I have to say Iranian leaders have demonstrated a great deal of patience and tact with these funny westerner on the nuclear issue by still remaining in the NPT. North Korea couldn't take the nonsense charade anymore and detonated a nuclear device. That surely got the west's attention and now treads cautiously when dealing with the North Koreans.

Now, after all that they're doing to Ghaddafi, I believe North Korean and Iranian strategic thinkers feel vindicated for not giving in to western demands, concessions and guarantees - which are meaningless by the way. Ghaddafi, unfortunately is learning the hard way and those PGCC Sheikdoms will be wise to take a leaf out of Ghaddafi's experience.Ignore it at your own peril.

I can remember after Ghaddafi dismantled his nuclear program and shipped them all away to the west, he begun to make noise about how Iran's nuclear program is a "danger to world" and therefore must give it up.What a fool?? He wishes he's friends with Iran today.

I agree with you that Iran's political system needs reform but I also believe this won't happen overnight and certainly not with interference from foreigners.I believe the reform process is inevitable with regional/global realignment and will happen over time but at Iran's own pace.One thing the 1979 revolution achieved is that at least Iran's NOT a puppet client state of anyone and that I'm happy with. Yes, that has come at a great cost but at least WE still have out country and resources and WE determine the terms on how we use these resources.

Iran need 32 billion for maintaining the production not the total 150 billion . Saudi Arabia needs 10 times more than this to maintain two times more production . It happens when the Arabs do not make any move when their "Kings" sell their country to the west and believe that Iran is behind the Bahrain revolution by the propaganda of their west loving "Kings" . Arabs do not have a "Better future" . They will understand it when oil is all bought by the west and they have nothing to sell . Well , Allah will not help you then , you helped people who pee on Quran and burn them everywhere . War is foolish , at least you could stop supplying oil to the tyrannical west .

I don't think western sanctions are able to reduce investment into Iranian oil sector. This is wishful thinking of Uskowi.
The US tried to bind Chinese investment exclusively to Iraqi oil sector (in hope this would damage the Iranian oil sector), to no avail as we know today, as China is now investing in Iran as well as in Iraq ;-). It's even interesting for China to invest in Iranian refineries and purchase only the refined oil products afterwards.