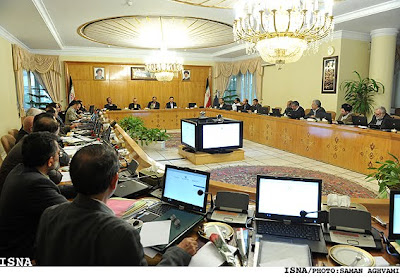 Iranian President Mahmoud Ahmadinejad today chaired a meeting of his cabinet that was attended by Hojatoleslam Haydar Moslehi, the minister of intelligence. Moslehi’s attendance brings to an end Ahmadinejad’s refusal to seat him at the cabinet meetings and signals a major victory for Ayatollah Ali Khamenei, the country’s supreme leader, who last week had ordered Ahmadinejad to reinstate Moslehi after he was fired by the president. Also present at the meeting and sitting next to the president was Esfandiar Rahim Moshaie, Ahmadinejad’s controversial chief of staff.

Moslehi is the man who found out the Spy cells of Israel in Lebanon , he is a hugely trusted man for sure . Ahmedinejad's move of firing him was wrong , that's all . But sooner or later Ahmedinejad understood it . No one is perfect .