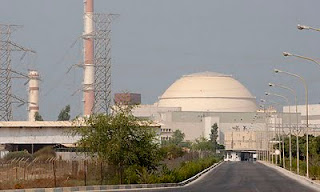 Iran's Bushehr reactor has become operational after a series of delays according to the Russian company that built it amidst (primarily Israeli) concerns that the plant may be used to help Iran build nuclear weapons.

On a related note and in hindsight this print ad is mildly amusing: 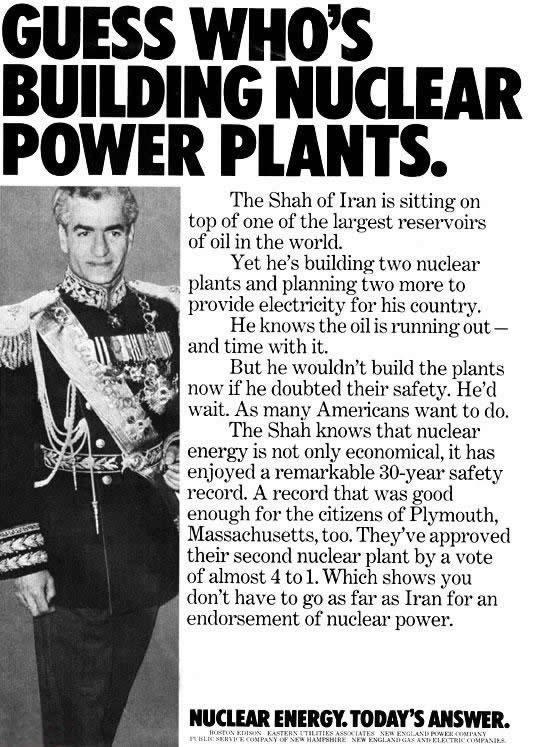 From around the mid 1970's it shows Reza Shah Mohammad Pahlavi as a poster child for a pro nuclear power campaign.

It was around the same time that construction begun on the Bushehr reactor. However construction was halted and it was left unfinished following the Islamic Revolution in 1979 and subsequently restarted in the mid 1990's after Tehran and Moscow made a one billion dollar deal to finally complete it.
Posted by Paul Iddon at 1:13 PM

why dont u use a proper photo instead of some round the corner 22 year old photo to im ply it as a risky dangerous place.

reminds me of one of the rules of foreign iran reporters who visit tehran.

they are told to search and find non flattery backgrounds like half built houses and old buildings as background when reporting from tehran.

Didn't Shah donated the Iranian oilfields to the British and US oil companies and jailed the only true democratic leader of Iran ? How come Uskowi and others do not know or confess that ? Wanna destroy the future of Iran by putting another Shah through your propaganda ?

Do you know
how the siemens selected 1978 as nuclear plant Builder ?

via bribe to the shah.

How can we be sure it is safe from Stuxnet or derivatives of it? I am scared- live near by!

@Anon 3:21 PM
could you maybe post a link of what you would consider a proper photo of the plant?

I just used that photo because it was the first one I could find of the reactor in question.

@Anon 1:20 AM
no one is denying the coup of 1953 and what propaganda are you talking about?

I was merely pointing out the irony in the fact that construction begun on the Bushehr reactor during the Shah's era (when as you pointed out British and US oil companies were prevelent in Iran) and was encouraged as evident by the print ad and now that same reactor when it is finally completed is of major concern to the same western sources who at first used the nuclear program it was part of as a promo for building more nuclear power plants in the United States.

here is one Paul

thank you, I replaced the original photograph with that one


Your comments, input and views are much appreciated - the blog would be a pretty mundane place without them!

Shah was the one who in his 1973 speech said the british must pay alot more or we will sell our oil elsewher.Shah in the 70's told the west to shove it and put the price up by 4 times

Some people dont know how much good he did. He and his father who built iran

Here are some more pictures: