According to the LA Times:

Iranian supporters of Shiite dissidents in Bahrain saw their second flotilla in less than a month turned back from the Persian Gulf kingdom Monday.

The 120 people aboard the two-ship "flotilla of solidarity" included a mix of workers, athletes, lawmakers, physicians and nurses, according to the semi-official Iranian Mehr News Agency. They had left the Iranian port of Bushehr, traveled a dozen nautical miles and were approaching international waters when they were forced to return to port by the Iranian coast guard, according to Mehr News.

There was speculation that the ships, including one named Ayat al-Ghermezi after the late Bahraini dissident poet allegedly raped and murdered by security forces, were barred from entering Bahraini waters after being intercepted by Gulf warships. 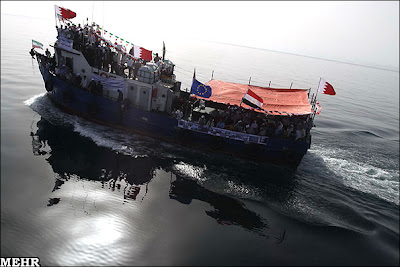 The Ayat al-Ghermezi of the "flotilla of solidarity" 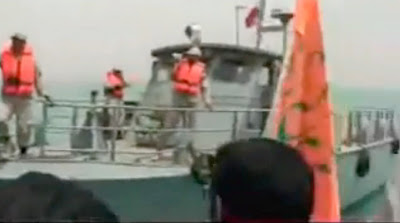