Ahmadinejad Returns to the Cabinet, Refuting Reports on Pre-Conditions for His Return 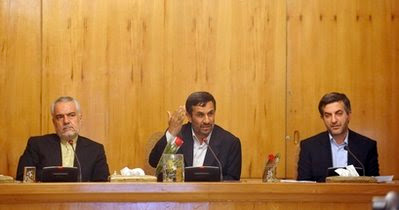 President Ahmadinejad Presiding Over the Cabinet Meeting. Tehran, 1 May 2011. Ahmadinejad is Flanked by the First VP Rahimi (l.) and Mashaie

Iran’s President Mahmoud Ahmadinejad today attended a meeting of his cabinet, breaking a boycott of cabinet meetings that lasted ten days and during which he was absent at three scheduled meetings of the Cabinet.

This blogger had reported that the president had set three conditions for his return to presidency, including the return of Mashaie to First VP post and the removal of the intelligence minister. Ahmadinejad’s return to the cabinet today may refute our sources and reporting on the subject. It could indicate that such preconditions never existed, or Ahmadinejad backed down from those preconditions. But we also need to follow political developments in near future to see if some form of agreements between the two camps were worked out that was persuasive enough for Ahmadinejad to return to presidency.

The pro-government media in Iran is reporting today that the reports about disagreements between Ahmadinejad and the supreme leader were the work of global arrogance (normally understood to mean the US and its close allies). The Iranian media however does not explain why the country's Majlis had to hold extraordinary closed-door sessions last week issuing what amounted to a strong warning to the president to end his boycott, unless it is claimed that the MPs were also victims of the global arrogance's propaganda.

Thanks for the note. Let me answer in English for the benefits of all our readers:

The news of dispute between the president and the supreme leader on intelligence minister and also on Mashaie were widely reported inside Iran. Majlis in fact conducted two extraordinary closed-door session last Wednesday and Thursday, at the end of which 260 MPs wrote the letter to Ahmadinejad warning him to obey the orders of the supreme leader without any reservations. These were facts and reported as such. There were also comments on how the disputes could end. We know Ahmadinejad has returned to his office, but do not know exactly what happened, what agreements were made prior to his return. This is not the end of the story by any means.

I've said this here and will say it again..Whoever tries to read too much into Iranian politics will end up going MAD, literally.

Every now and then they throw a bone at the enemies of Iran to rejoice in their warped attempt at sowing discord in their divide and rule policy..

I can understand why the so called "rift" between Dr. Ahmadinejad and the Supreme leader got a lot of people excited.I tell you, anyone betting on the downfall of IRI will be terribly disappointed. The American's have been trying it for the past 30 years and they always come back to square one..Long live Iran!!

Why does it have to be the downfall of Iran?

Don't you think taking more power off of the Supreme leader and giving it to the elected President will make Iran stronger?