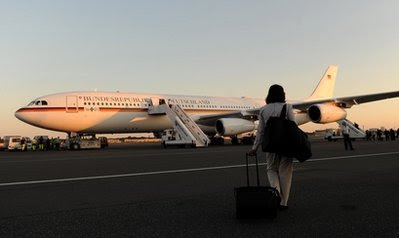 German Chancellor Angela Merkel's flight to India was delayed for two hours when Iran's government refused the plane permission to fly over the country. The Iranian move forced Merkel's plane to circle over Turkey for about two hours on Tuesday morning before the plane was eventually allowed to fly over Iran. Germany summoned the Iranian ambassador in Berlin to protest "the breach of international protocol." The reason for the temporary refusal to pass through the airspace is unknown [AP, 31 May].

Photo: The new German government Airbus A340 Konrad Adenauer, Germany's equivalent to Air Force One. Merkel was on her first trip aboard the plane. AP Photo

UPDATE: Kayhan, the influential conservative daily published in Tehran, has offered reasons for the government’s decision to force Chancellor Merkel's plane to fly over Turkish airspace for nearly two hours before given permission to pass through Iran:

“In a show of strength, the Islamic Republic of Iran refused permission to supporters of terrorism to pass over the Iranian territory… Ms. Merkel was kept wandering over an area near the border where she had tried to keep it insecure with the help of the terrorist group PJAK.”

“German support of terrorist groups does not end with PJAK. The (Germans) throughout the years have supported the terrorist Monfegh group (Mojahedeen Khalgh Organization)… Members of the German Bundestag have even invited the group’s leader (Maryam Rajavi) to address the parliament. During her speech, Maryam Rajavi called for sanctions against Iran’s oil and gasoline.” [Kayhan, 31 May].

These idiots scream "breach of international protocol" yet they don't mind when they refuse to refuel Iranian airlines, putting the lives of ordinary Iranian civilians at risk..

Iran should have let them circled over Turkey until they run out of fuel then they'll know how it feels...

I heard they had announced only 1 plane in advance... kowing to have screwed up.. the Germans are trying to artificially creart a provocational situatuin.. only to the benefit of Israel (its a classical suck up)

Honestly, how about a little background?

The list goes on. Yet the Western newswire services don't include any of this backdrop. Nader, you at least could.

I may be from the old school, but I believe you pick your fights smartly. Forcing the German chancellor to fly over Turkey for two hours before passing through to land on an official visit in India is not a smart move with the Germans or the Indians. Linking it to sanctions is even more problematic. You pick your fights on matters of principle, not on childish, I gotcha you, feeling good basis.

The government is under tremendous pressure these days, from the supreme leader to Majlis, to conservative papers and sites, to the clergy, etc. and it seems it cannot do anything right, from firing or choosing ministers or combining ministries, to even inaugurating with fanfare a refinery to produce gasoline, and so on. It should be careful not to fall into the trap of feel good actions that might have very temporary effects but could certainly come back and hurts the country later.

You'll rather Iran lick the boots of Merkel? And you think that Germany's sanctions on Iran that's actually affecting ordinary Iranian with nothing much to do with it and Iran retaliating is child's play or joke?

I've been following your blog and I must say you're one of the guys the west like to define as "moderate".I believe the true word should be naive and defeatist.

The only language the west understands is force. Being nice doesn't cut it. And especially with Iran, no amount of goodwill gesture from Iran will please them unless total surrender which I'm afraid is in their dreams...

And oh, i wouldn't worry about Merkel so much - she's on her way out anyway.

I am really happy that the government of Iran does not, and has not followed your policy that force is the only language available to us vis-a-vis the West. The government seems to be much more rational and acts accordingly in general. Please do not advise them on your views!

Acting from a position strength and acting childishly are not the same. Forcing a government leader's plane to fly over an area for nearly two hours belongs to the second category, and comes from naiveté of some of the leaders and their supporters who feel they are showing their strength.

This is really not surprising from a state which sponsors terrorism.
Since when have the Mullahs had any respect for international diplomacy?

Since when have the EU , US and Israel had any respect for the "third world people".Did you hear the song "bomb bomb bomb Iran" .It is the real face of "Humanitarian west".