Addressing the inaugural ceremony of the mass production of 125mm and 105mm shells for Saqeb Anti-Armor System here in Tehran today, Vahidi stated that production of the new ammunition is aimed at bolstering the Armed Forces' capability in ground battles and creating a wide range of anti-armor ammunitions.
The minister said that the country's Armed Forces have already been equipped with the new ammo, and mentioned that "the new shells can destroy all types of advanced, multiple-layer, new generation reactionary armors".

He added that the new ammo traverses five times faster than the speed of the sound, and enjoys high penetration power and can penetrate into armors with a thickness of 50 cm. 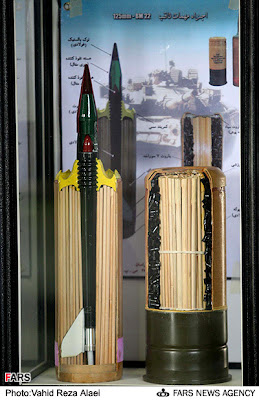 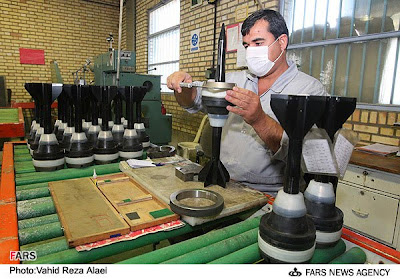 Now that is an important development..these are a vacin against invasionists of US !

These HE/sabot kinetic energy rounds would go through the Blazer reactive armor plates (ERA) as well as the main frontal armor on the US Abrams as well as the Zionist Merkava. This in combination with 12 different ATGM's (anti-tank guided missile)in Artesh/Sepah service will deter any armored thrust in the region.

Dear Mr.Uskowi , I have found an Iranian Military magazine , maybe it can be of some use for your blog .

Here are all the magazine isseus

whatis the saqeb system? i looked it up but it mostly brings me back to articles about the production of these ammo... is it some sort of recoilles gun?

Saqeb are 105mm, 122mm (D-30 type Iranian made) and 120mm and 155mm (Raad), GHN-45 artillery systems and tank ammo for T-72Z and Zolfighar tanks. Iranian military has a peculiar ways of labelling artillery rounds and airforce guided munitions (perhaps to confuse its enemies and keep them guessing).

Basically, these "Saqeb" rounds are advanced armor piercing ammo that can penetrate through the main armor of tanks and their external attached ERA (explosive reactive) plates. The utility of these shells is that they are as effective but cheaper to deploy than the DRAGON, KORNET, AT4,AT6, SAGGER, SPIGOT, SPIRAL, ,MILAN, TOW, RAAD, TOOFAN, COBRA and other ATGW in Iranian inventory with massive deployment of advanced RPG 29 with mechanized infantry units of both Sepah and Artesh as well for close quarter anti-armor capability.

With Iran's vast and rugged topography and natural mountain obstacles at all sides these are formidable defensive weapons. Iran's anti-armor capability today is perhaps a million times better than the rag tag post-revolutionary Sepah/Basij and Artesh units that stopped Saddam's armored thrust in Khuzestan and Ilam in 1980 dead in its tracks by sheer dint of bravery and using primitve weaponry as the jeep mounted 107mm recoiless rifles, RPG 7 and a springling of jeep TOWS which many young soldiers did not know how to use properly. Only the AH-1J Cobra TOWS were used effectively and with very high kill ratio by excellent low flying sorties. In many cases Iraqi tanks in built-up areas were destroyed even by molotov coctails (gasoline in a bottle) and hand grenades down the hatch by unmatched suicidal bravery of Iranian defenders.

However, any would be attacker today would face the might of Iran's modern and numerous anti-armor weaponry.

Isn't the gun much more expensive? missiles have the advantage of mobility, though the saqebs(I'll use an 's' here, seems right) would probably pose a threat to the first column of tanks.. they'd be hard to replace or protect.
Though iran's use of many weapons, forces a much more cautious approach. As you can't ever know what your gonna be facing.

Your point is valid. And Iran has invested in multiple layers of deterrence including several types of ATGM's (missiles. However, Iran has the 6th largest ground artillery in the world with over 5000 artillery pieces (including 81mm mortars and 107mm recoiless rifles and mobile MLRS rockets).

Iran currently does not face any imminent threat that it can not beat back, considering the weak state of all its neighbors and the US predicament in the region which is getting worse by the day. Just look at Af-Pak and Iraq is about to heat up if the US does not withdraw and Mehdi army goes on the offensive again in 2012 as Sayyed Muqtada has promised.

The NATO failure in taking on a small weak state like Libya has shown the limits of air power, even in a theatre where the Libyans have no real air defence but are holding off NATO attacks and digging in in a totally flat terrain.

Iran's ground forces rely on massed artillery as a force multiplier( with robust rocket and ground missiles also)and have developed a defensive doctrine based on the jange tahmili experiences of disrupting any western, eastern or southern armoured thrust by massive artillery barrages before it can be launched. Considering the topography of Iran, currently no nation including the overstretched and weakened US has the capability of massing the pre-requisite amount of armor required to attack Iran in an open flat assembly area like they did with Iraq via Kuwait and Saudi Arabia. Hence the multiple anti-tank systems will wreak havoc on any invading army even before they hit the natural defences of the Zagros as the Iraqis found much to their chagrin in 1980.

BTW, the Iraqi army that crazy Saddam mobilized was no slouch either in 1980 and had the best weaponry Arab money (Saudi and Persian Gulf petro-pimpdoms) could buy and the west and USSR could supply. The Iraqi advantage in MBT (heavy main battle tanks) was 10:1 in in the earlier days of the war and towards the end 20:1 but still could not make a dent in Iranian defence line at Karun and Zagros foothills in Ilam or the Hazaran massif in Kerman to the south east which would serve as a second line of defence with many massed artillery systems and mobile units.

In Iran's case any invader insane enough to attack a large nation (1.64 million sq kms) with around 78million ultra-nationalistic people with a battle hardened army armed with modern weapons and not afraid to die for their land would be beyond crazy.

To sum it up, Iran's strategy based on mobile warfare and concentrated layered artillery using the strategic depth of Iranian land using our rugged topography is very sound from a defensive military point. Iran has no offensive designs on anyone so a war will only be fought on Iran's terms and relatiation will be in multiple forms and the robust artillery is one of them.

Another interesting point is that today, almost all of the Persian Gulf southern shores and oil infrastructure is within Iranian upgraded artillery range with base-bleed ammo which was not the case during the jange tahmili. So investing in precision artillery shells and anti-tank armor piercing ammo makes perfect sense and dates back to the post-jange tahmili military reorganization strategy formulated by General Sayyed Ali Shirazi and many of the senior brass today who were young officers then and played a pivotal role in Iran's defense.