Ford and the Shah

Jimmy Carter is often the one scrutinized (rightfully in a lot of cases) in hindsight over the rapid downfall of the Shah during his time in office, this however has clearly overshadowed his predecessors (short as his tenure was) inability to take a meaningful stand against Iraqi Baathists during Saddam Hussein's rise to power. 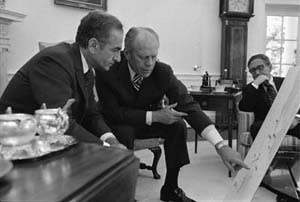 President Ford with the Shah of Iran as
Kissinger watches on.

The Iraqi Kurds have come along way in Iraq since the 1960's with the current President Talabani himself a Kurd who instead of opting for an independent autonomous Kurdish state in the north of Iraq worked tirelessly in creating a united democratic and secular state out of a country on the brink of collapse.

The Kurds had fought a war with Iraq throughout most of the 1960's and in 1970 both sides ceased fighting after they had come to a stalemate and attempted to initiate a peace agreement, which lasted a mere four years before Iraq again in 1974 began a new offensive.

This was around the time Gerald Ford became president of the United States following Richard Nixon's resignation over the Watergate scandal, around this time the United States evidently had a longstanding warm relationship with the Pahlavi dynasty in Iran whom it supported in his arming and financing of the Iraqi Kurds who were being driven close to the Iranian border by the Iraqi Army.

However this campaign of arming and financing the Kurds in their struggle for autonomy was short lived as in 1975 the Shah of Iran signed a separate peace agreement with Saddam in Algiers which became the 1975 Algiers Agreement that was to settle border disputes (in particular the Iraqi claim over the oil rich Khuzestan region in the south of Iran).

The Shah agreed to stop supporting the Kurdish rebellion and the United States terminated its flow of arms and finance, Kurdish leaders fled as fighters surrendered en masse, 5,000 Kurdish rebels died in vain as their rebellion was rapidly crushed.

Saddam would later violate the Algiers agreement when he launched a large scale invasion of the Khuzestan region in 1980 a year after the Iranian Revolution had overthrown the Shah and brought on the longest and one of the most brutal wars of the 20th century which would not end until 1988 and also saw the Iraqi Kurds subjected to a genocidal campaign known as the Al-Anfal campaign which saw thousands of Kurds indiscriminately gassed in the infamous Halabja gas attack.

President Ford was only in office for two years but his dealings with Iran (among other things) had terrible long lasting effects on the region.
Posted by Paul Iddon at 2:35 PM

It is a known fact that Kurds were betrayed by Shah and his mentor Ford but never knew that the Khuzistan province was on the negotiating table. Perhaps you mean Shatt al-Arab or Arvand Rud? While majority of kurd fighters continued the fighting without Iranian support, a sizable number accepted a very generous hand shake by Shah and Ford and settled in the neighbouring Kurdistan and Azarbaigan provinces.

screw the shah.. he is history.

Why are we writing as if the downfall of the Shah was a bad thing? He was no different than the Baathist. The Shah ran away and died like the coward that he is in Egypt because he sold his soul and neglected the Iranian people. It is a mistake to call this piece of crap a "Shah". The CIA brought Saddam and the Baathists to power and kept them there so why should Iran be blamed for what happened to the Kurds? The Kurds should blame the CIA if they want to blame someone. When the Kurds were getting crushed Iran helped them. Where were the Kurds during the Iran-Iraq war? How many of them fought for Iran? The Shah was a maggot and all of those who are still upset because they lost their money or some real estate when he was kicked out can go to hell. If you want to feel bad you should feel bad for all the Iranians he tortured and killed in his dungeons while you were eating caviar.

it is this nostalgia... some feel when talking about the past.

The shah erra as of 28 mordad was a terrible, despotic and unforgivable phase in the history of Iran

Last 30 years has been a challenge and struggle and Iran has been moving faster in many fields than 57 years of Pahlavi.

Socially we are not as fast, and that is because of the globalized natutre of today and that we can compare... Iran however is developing socially, taking its time.. slowly... alowing everyone to come along and not only the "bala shahri"

don't get insecure with the sloganeering of some old dinasores

other words Iran is on the right path.