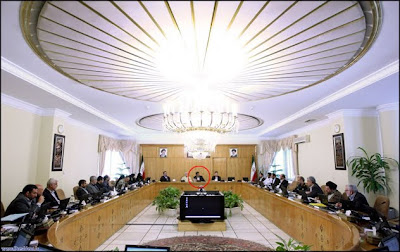 Today's Cabinet Meeting Presided by Ahmadinejad (circled); But No Trace of Moslehi
Photo: Mashreq via president.ir

Mashreq, an Iranian news portal, reported today that the intelligence minister Haydar Moslehi was not in attendance in today’s Cabinet meeting, contradicting reports by Iran’s official news agency IRNA and the official website of the president. Mashreq reprinted a photo of the meeting, which was originally posted at president.ir, the president’s official site, with Ahmadinejad presiding over the meeting but no trace of Haydar Moslehi among the ministers in attendance.

If true, the absence of Moslehi in the two meetings of the cabinet since Ahmadinejad ended his boycott shows the issues that originally created the political crisis are still unresolved.