US Naval buildup in the Persian Gulf 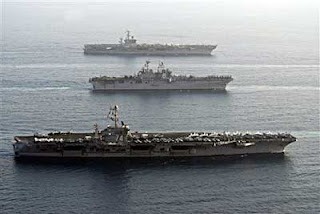 According to an article from Debka the Obama Administration has arranged for a large naval strike force to be sent to the Persian Gulf carrying 6,000 marines and other sea combatants.

This is the start of a claimed three month build up in the Persian Gulf which will reach peak level around August where a planned four or five aircraft carriers will make up US military resources in the Gulf.
Posted by Paul Iddon at 1:41 PM

Email ThisBlogThis!Share to TwitterShare to FacebookShare to Pinterest
Labels: attack on Iran, Persian Gulf, US Navy

Debka is perhaps two lonely Zionist ladies in an apartment spouting war fantasies. 99% of DEBKA "intel" is either disinformation or wishful thinking. However, the US expansion of the ex-Soviet airbase at Shindad is more of noteworthy vis a vis the Iranian situation. I am surprised that this blog has not posted it yet. Iran was expecting this development and had upgraded its own airfield at Birjand. As far as the carrier build-up in the Indian Ocean is concerned, even if true, it is not going to make much of difference unless the US mobilizes large number for ground troops and pre-positions at least 10 armored or mechanized divisions for a ground war against Iran which will be inevitable if the US initiates a "bombing" campaign against Iranian nuclear/military infrastructure. Which is highly unlikely considering the current US geo-strategic and economic quagmire.

Pentagon Plan to Beef Up Afghan Base Near Iran May Rile Regime
May 21 (Bloomberg) -- A U.S. plan to upgrade its airbase in southwestern Afghanistan just 20 miles from Iran’s border will likely rile the Islamic regime, bolstering suspicions the West is trying to pressure it with military might, analysts say.

The Defense Department is requesting $131 million in its fiscal year 2011 budget to upgrade Shindand Air Base so it can accommodate more commando helicopters, drone surveillance aircraft, fuel and munitions.

Plans to expand the base come as the U.S. works to strengthen the militaries and missile defenses of allies in the region and presses at the United Nations for a new round of sanctions aimed at forcing Iran to curb its nuclear program.

U.S. military officials say the base is only to support U.S. and Afghan military operations in Afghanistan. Iran will likely view the Shindand buildup as another step to squeeze it, said Kenneth Pollack, director of the Saban Center for Middle East Policy at the Brookings Institution in Washington.

“Whatever U.S. intentions, the Iranian regime will see it as a threat -- as another American effort to surround Iran with U.S. military forces,” Pollack said in an interview.

“The Iranians are almost certainly going to assume that a beefed-up intelligence, surveillance and reconnaissance presence is really about spying on them,” he said.

Andrew Krepinevich, president of the Center for Strategic and Budgetary Assessments in Washington, shares that view.

“The positioning of the base gives us the opportunity to monitor any efforts by Iran to serve as a sanctuary for anti- government Taliban and allied forces, and to support operations in Iran itself if that were to become necessary,” he said.

states that China has developed specific ballistic missile called Dong Feng with a range of 2000 KM and a speed of Nach 10: Accordingly "The size of the missile enables it to carry a warhead big enough to inflict significant damage on a large vessel, providing the Chinese the capability of destroying a US supercarrier in one strike."

I know Shahab may not be accurate but can two or three of them fired simulteneously destroy an aircraft carrier. I guess cruise missiles like Nour etc will not be able to inflicit sufficient damage.

Debka is notorious for erroneous fabrications and simplistic propaganda. The USN would have to be completely insane if not technically and operationally inept beyond reason to station 5 CVN's into the shallow and narrow confines of the Persian Gulf which is barely 50 meters deep outside of most navigated maritime lanes. Even the 5th fleet HQ in Bahrain barely keeps two Aegis class (DDG) destroyers on station let alone a highly visible bullseye target like a carrier which would be an early Christmas present in case of hostilities to the highly accurate and dispersed Iranian missile batteries and fast attack craft using a combination of domestic, Chinese and Russian HY-1, YJ-1/ C-80, HY-3/C-301 and YJ-2/C-802 medium-range anti-ship missiles, to name just four and more than likely the Russian Sunburn and Yakhont SSM, not to mention the mass Iranian produced KH-55 and Kh-59 (AS-13 'Kingbolt') cruise missile derivatives launched by SU-24 Fencers. The confines of the Persian Gulf dominated by the jagged Iranian coast dotted with land based SSM, rockets and artillery would be ideally suited to Iranian swarming and asmmetrical warfare capabilities and tactics. So even a washed out JG lieutenant out of Annapolis would have more sense than to expose the whole US carrier fleet in a hostile narrow body of water barely 50 kilomters wide at he maximum and subject to a complete Iranian chokehold at the straits of Hormuz.

I believe Debka errs more in favor of hype than sound naval tactics or understanding of modern military capabilities.

They (US) are after the 3 islands.. they want to occupy them and establish their bases there (permenantly) the Arabs shall give them the blessing they need and the UN.... well we all know what they are.

been in planing for a couple of years now.

DEBKA is not a news agency, it's a news manufacturing plant! If the news is not confirmed by other sources soon, it should not be considered seriously.

Totally agree with Nader. However, it is always insightful to monitor Debka and Jerusalem Post etc, as they are the prime wishful mouthpieces of the Zionist entity. These types of news factories provide an insight into Zionist thinking and regional intrigues and what they are hoping for via disinformation and planted stories to see the reaction of different nations, particularly Iran. This is psy-ops 101.

No problem to cover and analyze stories from "news" sources that are not renowned for their journalistic integrity, but are important nonetheless for their respective positions in their societies, I regularly cover Kayhan for example. We need to be vigilant however that what we read there is not necessarily news!

That region of the border is the major drug corridor between Afghanistan and Iran. If it's the intention of ISAF/NATO to beef up intelligence and operations in this area, it might not be as poorly received as these analysts suggest. But, of course, if this potentially expanded force is going to stand on its hands or focus on Iran's security forces in the region, such as NAJA border protection units, I'm sure the Iranians aren't going to be too upset about it. With ISAF/NATO stretched to cover Helmand and upcoming Kandahar, spreading resources to cover this area doesn't make sense. And sure, it may represent an addition to any eavesdropping abilities but looked at conversely, a US-led asset in the process of build-up in proximity to Iran's area of influence in Afghanistan could be convenient for its aligned proxy forces in times of escalating hostilities. For it is the potential disruption and harm to ISAF/NATO operations in Afghanistan that continues to serve as an element of deterrence to an attack on the Islamic Republic of Iran.